From Doug to Dax 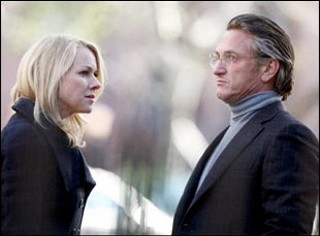 The Austin Film Festival announced ten titles for its 2010 fest today, with the regional premiere of Doug Liman's Fair Game**, based on the autobiography of famously exposed undercover CIA agent Valerie Plame and starring Naomi Watts and Sean Penn.

The other nine make a motley crew. You've got a documentary about teen magicians competing for a world title in Make Believe. You've got British female auto workers protesting equal rights in the narrative feature Made in Dagenham. And you've got Dax Shepard (Punk'd) writing, directing, and starring as himself in Brother's Justice – which probably would have sent us running for the door, had we not already warmed to his grinning goofball on NBC's Parenthood and the appropriately moronic Frito in Idiocracy. All in all, not a bad-looking bunch.

Press release, including all ten titles, below. And a very special treat, if you keep scrolling …

This year’s film lineup will include everything from the obscure indie film to the big-budget, Oscar-bound production. Among the world, U.S. and regional premieres spanning all genres from documentary to horror at AFF this year will be a great selection of Austin-made films showcasing the amazing talent of Texas filmmakers, including Eric Heuber’s Rainbow’s End, Bradley Scott Sullivan’s I Didn’t Come Here to Die, and Steven Belyeu’s Dig, which are all part of this year’s Early 10. Also just announced are screenings for the new Doug Liman film, Fair Game starring Sean Penn, The Space Between starring Melissa Leo, and Dog Sweat, which is about the lives of twenty-somethings in Iran.

The complete list of films screening at AFF this year including short films and competition titles will be announced in mid-September.

Motivated by Box Office statistics, Dax Shepard, with the help of his buddy Nate, has made a decision to leave comedy to pursue his dream of becoming an international Martial Arts action star.

Set in the midst of a small town, against the agricultural landscape of South Texas, "Dig" tracks 23-year-old Mike in his search for answers following the untimely death of his father.

Both dramatic and funny, Dog Sweat intertwines the lives of six young Iranians as they struggle to satisfy their private and personal desires in the face of conservative Islamic society.

A suspense-filled glimpse into the dark corridors of political power, a riveting action-thriller based on the autobiography of real-life undercover CIA operative Valerie Plame (Naomi Watts), whose career was destroyed and marriage strained to its limits when her covert identity was exposed by a politically motivated press leak.

The story of six young volunteers working on a humanitarian project in the woods. Horrific accidents, rash decisions and the unpredictability of human nature lead them all to the same disturbing conclusion: volunteer work can be a killer.

The story of the 1968 strike at the Ford Dagenham car plant in England, where female workers walked out in protest against sexual discrimination and the woman, Rita O’Grady, who lead the fight (Sally Hawkins)

A coming of age journey set in the quirky subculture of magic, this documentary follows six of the world's best young magicians as they battle for the title of Teen World Champion.  From the producers behind The King of Kong.

An invitation to record with The Legendary Stardust Cowboy prompts Country Willie Edwards and his band ‘The Cosmic Debris’ to launch their first west coast tour. Having never broken the gravitational pull of Deep East Texas, six men and two roosters embark on a journey to the other side of a dream.

Through archival footage Nicholson tells the story of the real Warriors that walked the streets of New York City in the 1970s and the harsh reality of gang life in a city that seemed to be falling apart.

A world-weary flight attendant and a prematurely wise 10-year-old Pakastani-American boy connect with one another amidst the chaos of September 11, 2001. When Montine discovers the boy's direct personal link to the terrorist attacks, she instinctively embarks on an unsanctioned cross-country road trip to help Omar discover his uncertain future.

** Yeah, different Fair Game. But who's up for a stroll down memory lane?