Cast of the nerdcore adventure hit the Highball

So with Scott Pilgrim vs. the World hitting cinemas harder than Goro's finisher today, where else would the cast and director chose to hang out last night other than the Alamo South Lamar and The Highball?

After gamely sitting for Q&As for not one but two packed-out advance screenings (courtesy of Fantastic Fest and Ain't It Cool News) eponymous hero Scott (Michael Cera), his sister Stacey (Anna Kendrick), the girl of his dreams Ramona Flowers (Mary Elizabeth Winstead) and her evil exes Todd Ingram (Brandon Routh) and Gideon (Jason Schwartzman) joined director Edgar Wright and his co-writer Michael Bacall, as well as a few hundred good friends, for a swift drink.

It's one big smorgasbord of pop culture and video game references (how many other films this year will do a visual homage to Revolutionary Girl Utena?) Wright admitted that his favorite blink-and-you'll-miss-it homage is a Flash Gordon moment. While he firmly expected everyone in a Drafthouse crowd to get the gag, he explained that he was thinking about the audience member in every other screening who would find themselves the only person in the cinema laughing at the insider gag. "I put that sound in for that one person," said Wright. 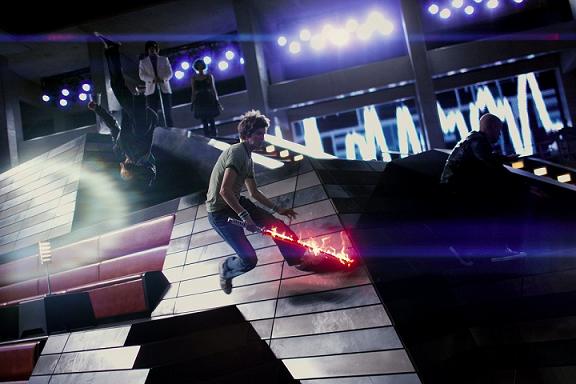 Aside from the mangaisms and sci-fi references, what Wright disarmingly called "the best comic book adaptation opening up against Eat Pray Love" has plenty of superhero connections on-screen and off. It was Routh who put on the cloak when Superman Returned; His fellow evil ex Chris Evans will be swapping the Human Torch's flame-proof duds for Captain America's shield; plus Thomas Jane took off The Punisher's death's head flack jacket to join the Vegan Police. During the Q&A, Schwartzman admitted to his own less superheroic homage in his portrayal of evil ex-itude: "Lex Luthor as played by Gene Hackman is my favorite villain. … It's fun to play passive aggressive."

Even Wright has his own Marvelous connection: He confirmed that his adaptation of Ant Man is one of the project's that he may be looking at again – that is, once he's recovered from his Pilgrim's progress. "I've been working flat-out on this for two years," he said, but the scripting process started three years before that. His next project? "Sleeping."

Of course, it's hard to get through a Q&A with Wright without touching on the topic of his old Spaced/Shaun of the Dead/Hot Fuzz cohorts Nick Pegg and Simon Frost (read Marc Savlov's in-depth interview with the triple-headed beast of British comedy here.) They're in post-production on sci-fi comedy Paul, directed by regular Michael Cera collaborator Greg Mottola. Wright saw the other half of what he dubbed the "Superbad/Hot Fuzz exchange program" at Comic Con, and added that "I miss them too."

So, the big question: Who would win in a fight, Pilgrim's nemeses in the League of Evil Exes, or their big adversary from this weekend, Sylvester Stallone's gang of mercenaries from The Expendables?