Praise From the 'Predators' Premiere

How home-town talent made sequel possible

Predators of Austin: From Robert Rodriguez's pen to Troublemaker Studios and, finally, the Paramount (Photo by Richard Whittaker)

It may have been the presence of Oscar-winner Adrien Brody that generated the press scrum outside last night's Predators world premiere at the Paramount. Yet inside the biggest plaudits were reserved for the local crew that turned around a $50 million action movie in under a year.

The quasi-sequel to the 1987 John McTiernan/Arnold Arnold Schwarzenegger action classic Predator may have been brewing in producer Robert Rodriguez' brain for a decade and a half (read Marc Savlov's interview with him here) yet the actual production went from final casting to shooting in a week and a half. First footage only turned up at SXSW this year, and now it's a complete (and gloriously grisly) film. As director Nimrod Antal told the audience, "I haven't made many American films, but I've never seen a crew hustle like this crew did."

Aside from a strong home-town presence at the screening (Alamo Drafthouse supremo Tim League, Ain't It Coolster Harry Knowles, and at least one Grindhouse babysitter twin were in the crowd) there was a lot of Central Texas on the screen and in the credits. Many pivotal scenes were shot in Rodriguez' Troublemaker Studios in East Austin but the producer reminded everyone to keep an eye out for McKinney Falls and Hamilton Pool. Special praise was reserved for Rodriguez's longtime technical collaborators at AMD, but there was a hoot and a holler every time an Austinite's name appeared in the credits (which was often.)

The event was a way to give something back to the local cast and crew, and also to organizations that help keep a film industry in Texas. Proceeds from the event went to the Austin Film Society's Texas Filmmakers' Production Fund and the Texas Motion Picture Alliance. However, Rodriguez also took time to point out that, without the state's production incentives (the most recent law for which was signed at Troublemaker Studios) it would have been hard to make the case to make the film here.

With a tough economy and a lot of questions asked about discretionary and incentive spending by the governor's office, that program may be under scrutiny next legislative session. However, Texas Film Commission chair Bob Hudgins said at the after party at the Belmont (on the menu: fittingly, steak tartar and a crimson cranberry mojito dubbed 'The Predator'), film production is one of the fields were it's easy to prove that the incentives attract business that would just go elsewhere.

With Hollywood studios still shipping production outside of California, it was left to newly-minted action star Brody to pointing out the current contradiction in Texas cinema. When a local actor asked whether he should stay in Austin or move out to Hollywood, "They'll send you to Texas to work, but you'll get cast in LA." 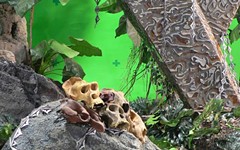 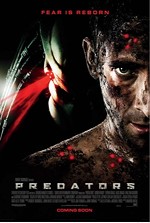