The Geek Shall Inherit the Fests

Who needs to go to San Diego for ComicCon? Between the home-grown genre film and literary festivals (Armadillocon, Fantastic Fest, and Ikkicon) and the out-of-towners (Wizard World and World Horror Con) heading into Austin in the next year, you can have the same experience and still sleep in your own bed.

The longest running sci-fi literary convention in the South-West keeps the emphasis on the printed word with a weekend long writer's workshop. Guests of honor include novelist Rachel Caine (author of the Morganville Vampires and Weather Warden series and Anne Sowards, executive editor at Penguin Group (USA) Inc. Space is also available at the dealers' room.

There are still two weeks left to submit your film to the best horror/fantasy/whatever-the-hell-Hausu-is festival, but this year the mantra is already, "Go Poe or go home." Jeffrey Combs will be presenting his one man show Nevermore … An Evening With Edgar Allan Poe. Anyone that caught him do Poe in the Masters of Horror episode "The Black Cat" can testify to his eerie summoning of the grandfather of gruesome. Combs' long-time collaborator, director Stuart Gordon, will also be in town to present two of his classic Combs-starring H.P. Lovecraft adaptations, Re-Animator and From Beyond. We also already know about Fantastic Arcade for gamers but, as always, wait for the torrent of world premiers, American firsts and general insane booking. Plus there'll be heavy contingent of Norwegian films this year (are Euforia Films the new Toho? Maybe so?) The festival is also looking for volunteers.

Austin's homegrown and fan-run anime and manga convention proved itself last year to be the New Year's Eve destination of choice for the CenTex Otaku population. It's as much about cosplay and the chance to watch obscure Japanimation as it is the guests, but two-time Austin Music Award winners One-Eyed Doll and Eyeshine, featuring Power Rangers star Johhny Bosch, will be providing the soundtrack.

After a massively successful WHC 2010 in Brighton, England, the top dog (well, hell-hound) literary gathering for all things gruesome picked the ATX for its 2011 resurrection. Already confirmed are the modern king of the zombies Steve Niles [Wake The Dead, 30 Days of Night], novelist Sarah Langan [The Keeper] whose new tome Empty Houses has been optioned by the Weinstein Company, and long-time friend of the Chronicle, the King of Nacogdoches Gothic, Joe R. Lansdale. There will also be an art show and dealer room. 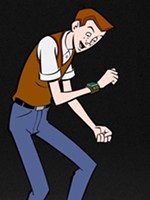