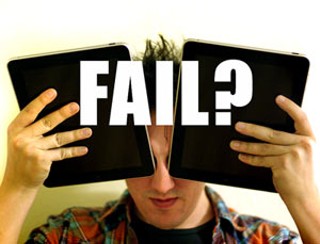 Since the official iPad announcement in January, nearly everyone I've spoken with has a strong opinion on this "magical revolutionary product." Steve Jobs is either saving the world, destroying the world, or condemning it to some kind of Disney-esque wasteland existence with his oversized iPhone. Zut Alors!

For some perspective, let's take a moment to reflect on a similarly polarizing product from the recent past: the Nintendo Wii.

Flashback to late 2006 and Nintendo's new gaming console is eliciting a curiously similar reception. Its detractors claim the name is a marketing disaster, the concept is a cheap gimmick, the device is woefully underpowered, and anyone who decides to purchase it must be a fool. Video game enthusiasts fret that attention from a broader audience will mean the death of the “hardcore” gaming genre (whatever that is), and the industry will run adrift in a sea of Bambi-eyes and fuzzy pastels.

Proponents suggest that the Wii will revolutionize the entire gaming industry. Every subsequent game will be motion-controlled and dissidents are being stubbornly resistant to change as they're wont to do. If Nintendo gets its way, everyone will come over to play virtual tennis and people will pretend to actually like each other again.

In hindsight, most of the above didn't happen. Nintendo's console does have an unusually large number of milquetoast titles, and competitors have announced competing devices, but the sky hasn't fallen. Fifteen-year-old boys are still goring zombies, and the rest of us are still updating Facebook at the bar. Some people watched James Cameron's Avatar and some people didn't. So it goes.

One lingering question in this comparison remains unique to the iPad: what's it for? For those still curious, here are five archetypes that have the potential to benefit most from the iPad, along with some of the apps that make it an enjoyable addition to the long list of devices with which we engage the big bad internet.

While the upcoming Google tablet (and the next generation iPad) will presumably offer more horsepower and a greater wealth of options, we arguably don't want more options for this demographic.

In similar less-is-more fashion, while apps like Epicurious and ABC Player are essentially the web warmed over, the benefit is just that: they're the web. Warmed over.

A minor caveat on this point: With so many inroads to content (iTunes, YouTube, ABC Player, etc for video alone), the tech-phobic individual may continue to find themselves overwhelmed.

At its best, the iPad is a great laptop replacement for people who don't require much from a personal computer. It's also a competent sidekick for many types of professionals. As touch-devices come down in price, watch for them to appear in the hands of doctors, lawyers, telcom workers, and near anyone who requires a streamlined portable device.

Despite the high anticipation leading up to the announcement of the iPad, what's truly surprising isn't the device itself, but the antipathy with which it was met. Comedian Louis CK sums up the sentiment best: "Everything is amazing right now and nobody's happy."

That said, for a marketing department that hits home run after home run, none of the terms Apple has used to describe the device (revolutionary, new, unbelievably priced) seem to ring true – indicating Apple itself isn't entirely sure what the iPad is for.

As for concerns about Apple censoring iBooks and removing apps from the store carte blanche, the issue seems to be that Apple will one day control everything (see Daily Show clip below). To which I can only offer the rebuttal: On the internet, someone is always ruining the internet (separate links).

[1] The link to the Sprint Overdrive service is to illustrate the point. It's not an endorsement – we haven't tried it. Drop us a note if you have.