Spike Jonze mistakes Austin for Portland; otherwise, he wows the crowd at his talk on the UT campus 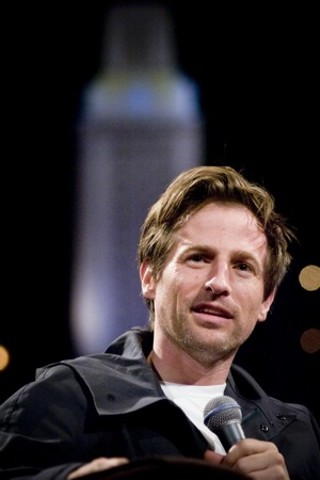 Spike Jonze had nothing to apologize for when he spoke with John Pierson's Master Class at UT on Tuesday night … well, except for the moment when he accidentally accused Austin of ripping off the "Keep Austin Weird" slogan from Portland.

"I apologize, Austin. Shit. Sorry," he said, once swiftly corrected, and smiled to the enthusiastic crowd in the Austin City Limits studio. For two hours, Jonze amiably fielded questions from Pierson; at one point, he insisted Pierson switch chairs with him so the side of audience staring at his back could get a new perspective. ("It's nice," he said. "It feels fresh.")

Jonze talked at length about his relationship with Where the Wild Things Are creator and friend Maurice Sendak. Jonze pointed out that he when he made WTWTA, he was the same age Sendak had been he wrote the beloved children's book. "He was adamant that I make my version. He said, 'Make something personal and don't pander to children – don't condescend to children.' That was very liberating to me."

He did dodge a few questions, as when the recently honored Pierson tried to get him to nail down an exact (and much speculated upon) cost of Where the Wild Things Are. "Let's say $100 million," Pierson said. "Let's say $500 million," Jonze joked. He also kept mum on the specifics of his Austin shoot, stating only that "we're doing a short film here." (The rumor mill says he's in Austin to film a music video with Arcade Fire, but the words "Arcade Fire" were never mentioned in the ACL studio.) Jonze did speak fondly about the Austin bike shops he used to frequent when he came to town in the early Nineties for BMX competitions.

The conversation touched at some point on every facet of Jonze's wide-ranging career as the maker of music videos ("Cannonball," "Sabotage"), shorts (including the just-released "I'm Here," streaming free on the Internet), ad campaigns (like the Gap demolition piece the company dropped), and his feature collaborations with friend Charlie Kaufman (Adaptation and Being John Malkovich).

At one point he talked about his time alternating between shooting the "polar opposites" of a documentary about Al Gore, of whom he spoke affectionately, and the grossout stunts on Jackass, which he co-created. "I didn't want to tell Al Gore what I was doing the day before."