Kick-Ass kicked off the big name films opening at SXSW on Friday night, and the stars still managed to make it to the Convention Center for Saturday's first major panel, "The Kick-Ass Cast Can't See Through Walls But They Can Kick Your Ass."

It was quite a cadre: John Romita Jr. and Mark Millar (the artist and writer of the original comic), director Matthew Vaughn, plus stars Aaron Johnson (Kick-Ass), Christopher Mintz-Plasse (Red Mist) and Chloe Moretz (Hit Girl).

Millar's last comic-to-movie adaptation, Wanted, was a big disappointment to fans of the original (it could have been a worse calling card, Millar added: "It was a film with Angelina Jolie in it.") Meanwhile, Vaughn said, "I was reading a lot of superhero scripts like Thor and X-Men 3, and they all felt the same to me." After a mutual friend put them in contact, they spent four hours on the phone and decided to work on a project together. Sorting through his creator-owned material, Millar initially looked at his Bible sequel American Jesus ("I thought, 'The Bible sold pretty well, and I want a bit of that," he noted) but Kick-Ass leaped to the top of the list.

Cue studio problems. Vaughn said, "The studios that were intrigued by it said we'll do it, but only if you get rid of Hit Girl and make it a PG." Of course, that wasn't going to happen, so instead they made arguably the biggest truly indie movie of the year. The big upside was that there was no studio involvement or agents whatsoever. The downside was, Millar admitted, they didn't get their (fever-)dream casting ("My entire idea was that any guy would pay $10 to see someone beat the shit out of Zac Efron," said the writer.) But since it was all effectively self-funded and self-produced, filmed in London and done as a close collaboration between Vaughn, Romita and Millar, they got the film they wanted on their terms.

That meant keeping Hit Girl: If you know the ultra-violent comic or have seen the infamous red band trailer, you'll know why there's no Kick-Ass without Hit Girl, the pint-sized pummeller of the picture. Out of the entire cast, Moretz had the most demanding training. Aside from acquiring handy skills like learning how to field-strip a gun, she said, "They made me really crazy-fit. They made me do 1000 crunches a night."

So what about the seemingly inevitable right-wing backlash? Vaughn had eleven words for ya. "If you haven't seen it, I'm not interested in your opinion." 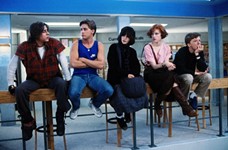