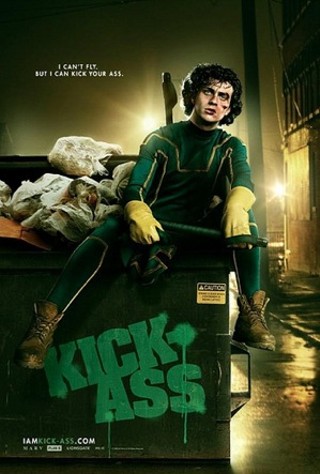 This morning SXSW Film announced its opening night film: comic book adaptation Kick-Ass, about a high school wannabe superhero who figures if he dresses the part, the rest will fall into place. Don’t be surprised if you see some homespun tights, capes, and codpieces at the screening; turns out Austinites like to play dress up.

The action comedy is directed by Matthew Vaughn (Layer Cake) from the comic by Mark Millar and John S. Romita and stars Aaron Johnson, Nicolas Cage, and Christopher Mintz-Plasse.

Other titles playing the festival include Cold Weather, from SXSW alum Aaron Katz (Quiet City); Elektra Luxx, Sebastian Gutierrez’ sequel to last year’s Women in Trouble; Lemmy, about Motörhead frontman Lemmy Kilmister (don’t forget Anvil kickstarted at SXSW 09); and Saturday Night, a documentary look into SNL by actor/grad student/conceptual artist James Franco, whose recent crossover into soap operas has ensured there are now three generations of women in my family all swoony for Generalissimo Dreamboat (welcome to the club, Gramma!).

More on SXSW can be found here. Kick-Ass trailer below. And keep reading for the full press release...

SXSW FILM FESTIVAL TO KICK-ASS IN 2010

Austin, Texas -- January 6, 2010 – Earlier today, the South by Southwest (SXSW) Film Conference and Festival announced it will host the world premiere of Lionsgate and Marv Films’ Kick-Ass for its 2010 Opening Night. A twisted, funny, high-octane adventure, based on the comic written by Mark Millar and John S. Romita, Jr., Kick-Ass was directed by Matthew Vaughn (Layer Cake, Stardust) from a screenplay by Jane Goldman & Vaughn. The South by Southwest Film Conference and Festival runs March 12 – 20, 2010 in Austin, Texas. Kick-Ass tells the story of average teenager Dave Lizewski (Aaron Johnson), a comic-book fanboy who decides to take his obsession as inspiration to become a real-life superhero. His life is forever changed as he inspires a subculture of copy cats, is hunted by assorted violent and unpleasant characters, and meets up with a pair of crazed vigilantes, including an 11-year-old sword-wielding dynamo, Hit Girl (Chloë Grace Moretz) and her father, Big Daddy (Nicolas Cage), and forges a friendship with another fledgling superhero, Red Mist (Christopher Mintz-Plasse). But thanks to the scheming of a local mob boss Frank D’Amico (Mark Strong), that new alliance will be put to the test. Opening in theaters nationwide on April 16, 2010, the film also stars Clark Duke, Evan Peters, Lyndsy Fonseca, Michael Rispoli, Garrett M. Brown, Xander Berkley and Omari Hardwick. The producers are Matthew Vaughn, Brad Pitt, Kris Thykier, Adam Bohling, David Reid, and Tarquin Pack. The executive producers are Pierre Lagrange, Stephen Marks, Mark Millar, John S. Romita, Jr. and Jeremy Kleiner. Jane Goodman serves as co-producer.

“Kick-Ass is a truly fun ride, with non-stop action, clever humor, and even heart, which is exactly what our audience has come to love and expect from SXSW every year,” said Film Conference and Festival Producer Janet Pierson, “We feel fortunate to have found such a tailor-made good time to kick off our 2010 event!”

Also announced were five narrative and documentary feature premieres, whose diverse perspectives exemplify the unique range of the SXSW program. The complete festival lineup will be announced in early February 2010. The 2010 SXSW Film Festival will include:

Cold Weather – SXSW Alum Aaron Katz directs this feature about a former forensic science major and avid reader of detective fiction, who, after making a mess of his life in Chicago, returns to his hometown of Portland, Oregon. There, he, his sister Gail, and new friend Carlos become embroiled in something unexpected.

Elektra Luxx – Following the successful world premiere of Women In Trouble at SXSW 2009, writer/director Sebastian Gutierrez returns with the world premiere of its hotly anticipated sequel. The film follows a hectic day in the life of former adult film superstar Elektra Luxx as she tries to survive in the straight world. The film stars Carla Gugino in the title role, and Joseph Gordon-Levitt, Timothy Olyphant, Emmanuelle Chriqui and Malin Akerman.

Hubble 3D - SXSW will present the first public screening of Hubble 3D at the Bob Bullock IMAX® Theater. Through the power of IMAX® 3D, Hubble 3D will enable movie-goers to journey through distant galaxies to explore the grandeur and mysteries of our celestial surroundings, and accompany space-walking astronauts as they attempt the most difficult and important tasks in NASA’s history. The film is directed and produced by Toni Myers.

Lemmy - A documentary from director Wes Orshoski, the film delves into the personal and public lives of heavy metal icon and Motörhead frontman Lemmy Kilmister. Nearly three years in the making, and featuring appearances by such friends/peers as Metallica, Dave Grohl, Billy Bob Thornton and pro wrestler Triple H, the film follows Kilmister from his Hollywood bedroom to the hockey arenas of Scandinavia and Russia.

SATURDAY NIGHT – Directed by actor James Franco, the documentary looks at what it takes to create an episode of the legendary comedy show, Saturday Night Live. Follow behind the scenes as the actors, writers and producers go through one frenetic week of trials and tribulations as each volley to get sketches on air.

South by Southwest Film Conference & Festival The SXSW Film Conference and Festival is a uniquely creative environment featuring the dynamic convergence of talent, smart audiences and industry heavyweights. A hotbed of discovery and interactivity, the event offers lucrative networking opportunities and immersion into the art and business of the rapidly evolving world of independent film.