Writer/director Peter Bratt and his brother, actor Benjamin Bratt, create a knowing portrait of a Latino father in the modern-day Mission district of San Francisco. 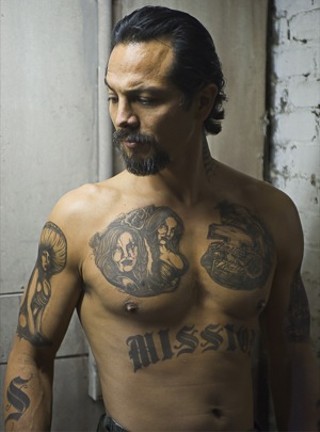 Benjamin Bratt plays a reformed convict and recovering alcoholic named Che in this film written and directed by his brother Peter Bratt.

Set in the Mission district of San Francisco, the film oozes with location detail and a knowing sense of Latino culture. In this lead role, Bratt delivers one of his finest performances as a complicated man who is accustomed to using intimidation and his fists to resolve conflicts. Yet he is a devoted and loving single father to Jesse (Jeremy Ray Valdez), a high school senior who receives top grades in school. Jesse, however, harbors the secret of his true sexual identity, and when macho Che unwittingly discovers that his only son is gay, he flies into a rage that forces his son from their home.

Just as it sometimes takes a village to raise a child, it also can take a community to elevate a parent. Jesse is given shelter by by his supportive aunt and uncle (played by San Antonio native Jesse Borrego and Talisa Soto Bratt). Che’s longtime neighborhood pals, who hang out with him at his basement garage where he salvages old cars and exquisitely refinishes them with meticulous paint jobs, also serve as a neighborhood Greek chorus. Most instrumental, however, is Lena (Erika Alexander, who’s best known for having played the lawyer Maxine on the long-running TV show Living Single). Lena moves into the apartment upstairs from Che and Jesse, and at first is viewed as a gentrifying interloper. Gradually, tensions among them diminish as they get to know the individuals behind the first impressions.

Peter Bratt’s script occasionally wallows in its melodramatic aspects but is, on the whole, an empathetic portrait of a man who struggles to work past his gut reactions. These reactions have served Che well in terms of helping him to become a respected neighborhood figure but they are impediments to any growth beyond boundaries of his outstretched fist. With his cholo tattoos and low-rider love, Che is an emblematic peacock of manhood. Yet he cooks and irons as well as any housewife, and is a nurturing influence when his own manhood is not under threat. Benjamin Bratt ably depicts both sides of this character and creates a memorable portrait in the process.