Extreme basketball doesn't sound like the basis of a great action movie. But just for a moment, imagine Yao Ming going for three points when he's taking an elbow slash to the face.

Fireball may be a bybrid martial arts/sports movie, but this is no Shaolin Soccer. Instead, it's a gritty and stunt-heavy actioneer set in the wild world of fireball, a no-holds-barred street basketball game run by the local mob bosses. Forget dribbling fouls: This is five-on-five meets muay thai, and if players die in the game, that's just fewer team members to split the winnings.

Preeti Barameeanat plays ex-con Tai and his twin brother Tan: That's not so challenging, since Tan is in a coma, beaten to a pulp out on the court. When Tai starts looking into who put his brother in hospital, he finds the local fireball league and, as any twin would do, passes himself off as Tan, back for revenge. While he's no Magic Johnson, he does have the useful ability to knee strike with the best of them.

Fireball is about as subtle as a lead pipe to the back of the skull (which is actually legal in the rules). From a free-roaming parkour punch up through the ferroconcrete tenements to the ultra-brutal final showdown in a dry dock, it proves that Thailand is now the international leader in martial arts movies. Co-writer/director Thanakorn Pongsuwan gives it a gritty depth that so many contemporary wire-fu movies lack, giving both the action scenes and the briefly-glimpsed domestic dramas that would drive players to enter the gladiatorial arena a gritty rub.

Odds are, this may turn up in some bastardized, bowdlerized and badly dubbed version turning up on cable some night, but don't mistake this for some sub-Steven Seagal discount mess. Fireball digs into the gangster underground and poverty-stricken streets of Thailand. 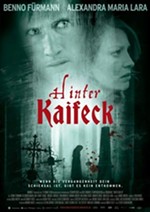 Fantastic Fest: 'Kaifeck Murder'
Bavaria: Come for the beer, stay for the rituals