Fantastic Fest: 'House of the Devil' 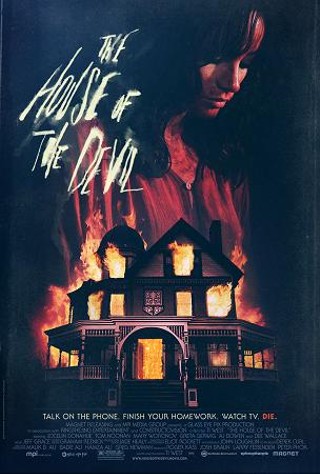 There are three theories about how Ti West made House of the Devil evoke the 1980s so successfully. One, time machine. Two, deal with the horned one. Three, astonishing horror director. Considering what a masterful retro supernatural chiller it is, option two seems reasonable.

This isn't just an homage to early 80s creeping horror: It's a reproduction so exquisite that some members of the audience were convinced that they must have rented this on VHS in 1986. West has channeled that Satanic cult scare that Geraldo Rivera whipped up and the whole cinematic genre of unease that it summoned. As West told the audience attending Monday night's Fantastic Fest screening, there's a lot more to recreating a decade than "some douchebag flipping a Rubik's Cube."

In vintage style, West places innocent college sophomore Samantha (Jocelin Donahue) alone in the creepy, rambling Long Island mansion, where every shadow and creaking floorboard is imbued with menace and dread. Tom Noonan (who consistently offers the best tall-and-eerie this side of Phantasm's Angus Scrimm) and art-schlock icon Mary Woronov are the soft-spoken and elegant Mr. and Mrs. Ullman, who hire Sam as the babysitter. She needs the money to move out of her dorm, so she accepts and ignores all the signs. Creepy house in the middle of nowhere? Check. Family a little too eager to see her stay? Check. The warnings from her street-smart but soft-hearted best friend (mumblecore heroine Greta Gerwig in a splendid big hair and stone-washed denim turn)? Check. The fact that, if cinema as taught us anything, it's that "babysitter" was the single most deadly occupation in the 1980s? Check.

After the uneven Triggerman and the Alan Smitheeing of his Cabin Fever 2: Spring Fever, West seemed unlikely to create something of this raw nerve intensity. From the plot to the pacing to the cinematography, it sits strong and sinister alongside such empty-house classics as Black Christmas and When A Stranger Calls, and the best demonic terrors of the era like The Changeling. It goes from no-burn to slow-burn to outright inferno in a taught and mostly dialogue-free 93 minutes.

That's what's important. West could have set this in any decade and it would still be truly chilling.

House of the Devil is available through video on demand from Oct. 1 and will be on limited theatrical release on Oct. 30.