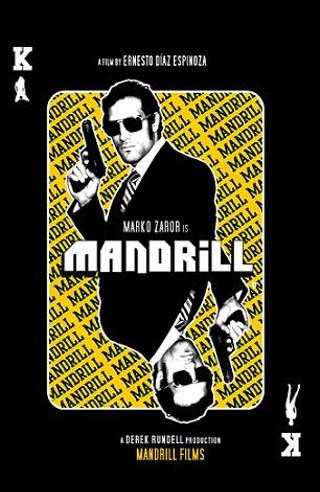 For anyone that yearns for the days when heroes were cool and lantern-jawed, heroines wore cocktail dresses, and every punch sounded like a baseball bat smacking beef, fear not. Mandrill is here to kick some ass and wear a big fat tie while he's doing it.

Mandrill (Marko Zaror) is a hit man, the best in the business in all of Chile: But he's also a man on a mission, seeking the one-eyed killer that slew his parents. Forget any Fugitive chest-beating: Inspired by his lascivious uncle Cheno and the cheesy Johnny Colt detective movies of his youth, he's become a red-blooded pastiche of unflinching masculinity.

Cue bone-cracking campaign of cold-blooded and cool-talking vengeance undertaken with such verve that even ol' stone face Roger Moore might lift an eyebrow in approval. That's not to say Mandrill is without wit. Writer/director Ernesto Diaz Espinoza dismantles this Bullet in midflight, setting Mandrill on a self-destructive path from the moment he starts trimming his sideburns and packing a Johnny Wad-sized Magnum.

As the star and stunt choreographer, Zaror now stands with Jason Statham, Marc Dacascos and Tony Jaa as the onscreen martial artists that still astound and innovate. Built like Dwayne "The Rock" Johnson (he served as the ex-wrestler's body double for The Rundown) but with more of a little-boy-lost innocence, Mandrill's rib-cracking fight scenes are defined by his style of fighting, a combination of jiu-jitsu and ground-and-pound that will make any fan of UFC swoon.

He's also a big part of the reason that, for all its fearless loyalty to 70s gangster exploitation movies, Mandrill never slips up on a big puddle of cheese. The other may well be the soundtrack by Espinoza's longtime collaborator Rocco, which has a whole Lalo Schiffrin going on.

Ultimately, it's hard to work out what's more remarkable here: Zaror's insane spinning kicks or that Espinoza has crafted a movie that knowingly celebrates the cool gangster genre without dropping into pastiche.