Fantastic Fest to Kick off Nationwide Sneaks of ‘Paranormal Activity’ 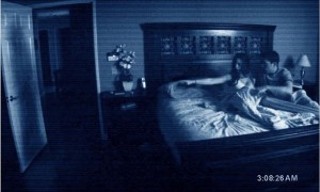 OK, so we like to front like we’re tough, but fact is, we’re an awful wimp when it comes to scary movies. Case in point: Our colleague Marc Savlov – good man – had to pre-screen a stack of Fantastic Fest films for us and let us know which ones were, um, not liable to give us an awful case of the oogly-booglies.

But still, even head-in-the-sand horror-phobes such as us know that Paranormal Activity is the fall’s buzz film. Those who’ve seen the film, which first screened at Slamdance in January, agree, in so many words, that PA is, like, the scariest fucking movie that ever was. (For once, the hyperbole is not ours. See?) The film, from writer/director Oren Peli, has mostly been under lock and key, but Fantastic Fest announced today that PA will premiere on FF’s opening day (9/24) at midnight, concurrent with seven other sneaks around the country and followed by successive nights of sneaks in other towns. (Go here to find out if you’re one of the lucky few.)

Here’s FF’s description: “In PARANORMAL ACTIVITY, after a young, middle class couple moves into what seems like a typical suburban “starter” tract house, they become increasingly disturbed by a presence that may or may not be demonic, but is certainly most active in the middle of the night. Especially when they sleep. Or try to.”

We’d give your our own slant, but honestly? We’re waiting until the soft, safe coo of daylight hours to check out the trailer. But you don’t have to: