Nintendo's Wii Sports reboot does more than go through the motions 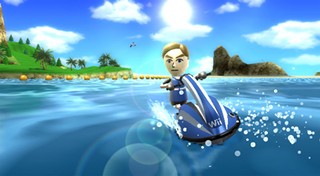 Watersports … in an E-rated title?

As a card-carrying member of the vaunted non-gaming gamer demo, I, like countless others of my ilk, embraced the original Wii Sports with open arms – well, invisible open arms, in keeping with my Mii’s floating extremities.

Its simplicity is its success – anyone can pick up a remote and have the basics of bowling down in a minute or two, something you can’t say for the latest button-mashing frag-fest. So had Nintendo trampled onto hallowed ground when they introduced Wii Sports Resort, not only an expanded update of their console’s flagship title, but one shipping with a new, more sensitive remote attachment, the Wii Motion Plus, that more closely mirrors players’ movements? Well, yes and no.

The first time you pop in the disc – after an instructional video on attaching the Motion Plus cube to the remote, which made me feel like a tool for bothering to read the instructions before booting up – you’re greeted not by a main menu, but one of your Mii characters – in my case, the feline-human hybrid modeled after our cat, Greta – sitting in the hull of an aloft airplane. A click of the A button, and kitty-cat’s out the door, skydiving – and this new sport is a wonderful example of the Motion Plus capabilities. (It’s also, in keeping with the Wii’s pick-up-and-play ethos, impossible to lose – the chute opens automatically.) The other, newer offerings fare similarly well: Archery is fun and challenging, and while it can be multi-player, its quiet, concentrated nature lends itself delightfully to solitary play. Frisbee is a blast, as you attempt to throw your disc toward a target, bursting balloons in the process as the challenge increases in difficulty; the panting, stylized pup that retrieves your disc each time is cute enough to beg for a Nintendogs crossover. Watersports like wakeboarding and power cruising also benefit from the remote’s newfound sensitivity.

It’s the original batch of sports that don’t fare as well, and may inspire grousing from old Wii Sports jocks. Far more subtlety, for instance, is required to add spin to your bowling ball as it hurtles down the lane, unless you want to end up in the gutter. The trouble was most pronounced with golf, perhaps my old favorite, as the remote’s sensitivity makes it difficult to make a smooth backswing and drive without lots of practice. Hunched over, fumbling with the remote in my golf stance, I had the silhouette of a hunchbacked onanist. (It does make putting a little easier, however.) Aside from the new sports and the new controller (more on that in a second), the third main aspect of Wii Sports Resort is its cartoonishly beautiful, improved graphics. The tropical island setting is awash with cerulean blues and sparkling skies, beautiful greens and sandy dunes. It looks great on my HDTV – and makes me wonder how much better they’d look through a HDMI output, if the Wii had one. Hopefully that’s not planned obsolescence on Nintendo’s part, although rolling out a new, hotly anticipated title – that requires a new remote attachment – certainly has the Big N happily wetting his beak. Of course, the game is shipped with a motion plus attachment (and a sheath tailored to fit the longer remote), and most games offer multi-player, in turns. But for two players to face-off in a new sport like swordplay requires a $20 investment in an additional attachment. Still cheaper than a Sandals vacation, I guess.

Bottom line: Wii Sports Resort is more of the same fun you’d expect, only different – which has its upsides and downsides. But really, anything that lets my cat skydive is a good thing in my book. 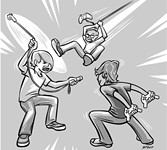 Console Wars: The Saga Continues
Sizing up the video-game platforms 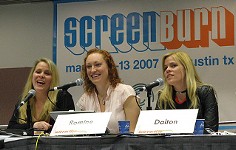 Frag The Market
What women gamers are saying about how companies are marketing to them? 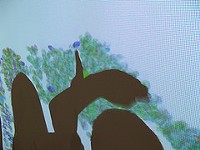 Sim Butterfly, Real Fun
What was the cool toy at the Screenburn Arcade?