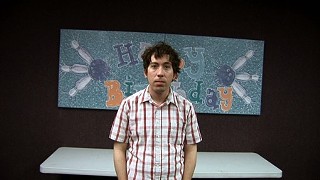 Justin Rice in Harmony and Me

Is it just us, or is the Austin Film Festival doing some kind of an elaborate dance of the seven veils? It seems every week there's some new tantalizing goody revealed about the upcoming fest. This week's tasty bit: AFF announced today ten titles from this year's lineup, including three intriguing-sounding documentaries about black comedy (Robert Townsend's Why We Laugh), screenwriting (Peter Hanson's Tales From the Script), and the 2008 national party conventions (Barry Levinson's Poliwood). But what we're most excited about is  Austinites' first chance – finally! – to see local filmmaker Bob Byington's super-buzzy Harmony and Me.

AFF won't announce the full festival lineup until mid-September – what a tease – but in the meantime, you can read the descriptions of all ten titles after the jump.

LA MISSION Writer/Director: Peter Bratt Cast: Benjamin Bratt, Jeremy Ray Valdez, Max Rosenak, Erika Alexander Regional Premiere Set in the seedy streets of the La Mission district of San Francisco, the film tells a story of redemption between a father and a son. Feared, yet respected, as the baddest Chicano on the block, Che (Benjamin Bratt), a reformed inmate and recovering alcoholic, puts his son above all else, but knows no other way other than resorting to violence and intimidation to get what he wants.

PUNCHING THE CLOWN Writers: Gregori Viens, Henry Phillips Director: Gregori Viens Cast: Henry Phillips, Mark Cohen, Guilford Adams, Chris Fairbanks, Derek Waters Regional Premiere Henry Phillips, a road-weary American comedian and troubadour, is down on his luck playing hell gigs in the desert. He moves to L.A. thinking he’s got nothing more to lose. It turns out he was mistaken: his reputation and his music are soon at stake, yet if he plays his cards right, it could all be grist for his darkly humorous songs. Director Gregori Viens brings back the feature version of his hilarious short film On the Air that played AFF in 2007.

THE SCENESTERS Writer/Director: Todd Berger Cast: Sherilyn Fenn, Blaise Miller, Suzanne May, Jeff Grace, John Landis, Kevin Brennan World Premiere When a serial killer starts picking off beautiful young hipsters on the east side of Los Angeles, a couple of crime scene videographers hatch a plan to catch him before the cops do. The Scenesters is an innovative and quirky murder mystery that both honors and deconstructs the conventions of the classic 'who-done-it?' film genre.

Austin Film Festival, Bob Byington, Harmony and Me, Tales From the Script, Poliwood, Why We Laugh, Robert Townsend, Bary Levinson