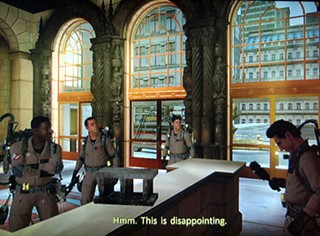 Just keep saying your yourself: "I ain't 'fraid of no cutscene."

Ghostbusters is a delightful little one-off. It's the sort of game that's desperately welcome during the dog-days of gaming summer, particularly if your platform of choice hasn't had copious amounts of Fallout 3 DLC to pass the time. Unfortunately, it's also the sort of game you get about a third of the way through before understanding how it wants to be played.

Some of the problems with Ghostbusters seem to stem from its greatest strengths: It is debatably one of the most authentic film-to-game titles out there. Nearly everyone from the original cast is present in voice. Aykroyd and Ramis return with a new script that both extends the existing canon and answers questions you didn't even know you needed answers to. There's no question however that this game is a labor of love that's going to delight hardcore fans of the films.

Additionally, the combat system —once you get used to it— is pitch-perfect in its role of making you feel like a bona fide Ghostbuster who has to sweat, tug, pull, swear, and otherwise relentlessly cajole each and every spirit into his or her boxy new home.

The game in many ways hinges on the combat system. It causes even minor ghosts to be a longer fight: This isn't a two-headshots-and-move-on sort of game. Almost every battle feels like a mini-boss, and on the hardest difficulty setting, a handful of low level spooks can feel like an all out final boss battle. Ghostbusters isn't just nostalgic in its presentation, but also in its difficulty on harder settings.

Because of this, and a desire to follow a speed more in keeping with the game's cinematic siblings, Ghostbusters is rife with pacing issues that present themselves almost from the first moment you load up career mode.

Cutscenes are more varied in quality and occurrence than recent Final Fantasy titles. While the pre-rendered cinematic ones are decent, scenes using the in-game models are all too littered with common problems like bad audio syncing and dangerous descents into the uncanny valley, making them useless as a potential reward system and simply empty servants of the storyline.

A third type of cutscene, more common than the first two, doesn't change the view or halt the player, it simply doesn't advance the action while the primary Ghostbusters conduct a spot of dialog in-game. This leaves your player endlessly roaming the small environment in wait, wondering if you're missing something. There's nothing to indicate to the player what they're supposed to be doing, or that they're even experiencing a cutscene. Frequently, dialog will occur with nothing else going on, then some bad guys appear, and conversation carries on as you battle it out. It's perfectly natural in film, but not so much in an interactive game. Awkward pauses before many of these audio events enhance the confusion.

To make matters worse, events that should trigger when the dialog is past a certain point often require backtracking or standing in a very, very specific spot. This seems to stem from a desire —presumably by Aykroyd and Ramis— to replicate the experience of a Ghostbusters film as faithfully as possible. While this certainly deserves accolades considering the state of the average movie tie-in, it unfortunately makes for a rather uneven presentation.

Other aspects of the game suffer for their loyalty to the films: Tutorials instructed by a fast-talking, pseudo-jargon spewing Aykroyd are accurate but somewhat overwhelming, particularly for a casual gamer like my girlfriend, who enjoyed Bioshock on the basis of its art deco flair, but ran screaming from Ghostbusters' basic combat tutorial. This is a title that's going to no doubt attract casual gamers, and as such should at least sport a more illustrative sandbox in its opening minutes.

This extends to environments that, while varied, feel repetitive and don't adequately make novel (or even cohesive) use of their themes. Some of the interior levels are also sterile in the texture/lighting department. Similarly, while several physics toys are introduced as part of the weapons ensemble, the resultant physics puzzles are few, unvaried, and lacking in inspiration. Haven't years of HalfLife 2 mods produced an adequate wealth of ideas?

The biggest complaint however is that this game feels about two months rushed, no doubt in part to what one can assume is publisher Atari's desire to get the game out during a lull in big-title releases and not try to compete directly with holiday titles. The outcome however is a negative impact on an otherwise enjoyable storyline, and several missed opportunities. In one transition, the player has just defeated a boss in an area, and then is instantly jumped to a cutscene where all the Ghostbusters are on a boat heading for the next level, with little explanation of what happened in between. In another, Peter Venkman goes off to investigate a suspicious character, but offers no details on his trip in subsequent cutscenes.

While other reviews have heralded exploration of the firehouse as turning up tons of interactive surprises in keeping with the canon, the opportunity for larger backstory and deeper, interactive minigames is completely glossed over. This would be forgivable except for the presence of a pool table. That a pool table is present and somehow not playable against other Ghostbusters is an affront to all that is delightful about games based around your favorite mythology.

All of these complaints however are in spite of the fact that I found the game to be an absolutely delightful nine hour diversion, and found a highly capable multiplayer mode at the end of it. While multiplayer could have enjoyed a “Ghosts vs. Busters” mode à la Left4Dead, it definitely extends the replay value considerably, and if you like the slower-paced fighting of titles like Lucasarts' Jedi Knight Academy in multiplayer mode, You'll no doubt find something to love here.

All told, this is a game worthy of serious rental, but it also needs to be given a serious chance (about 2 to 3 hours of gameplay) before you can truly assess whether or not it's worth a buy. If you have both an Xbox360 and a Playstation3, I recommend the version you've got the most friends on... the graphics aren't to a level where the PS3 is going to give you any added visual advantage.

Ghostbusters the video game is very much like Ghostbusters the film. There's nothing deeply poignant, cutting edge, or revolutionary going on here: it's simply a great way to obliterate a weekend of your summer.

Summer Fun: Free Parking
Movies in the Park, that is

I Sold the Lousy T-Shirt Off My Back and All I Got Was This iPad
What's Apple's touch tablet actually for?