Where the Wild Things Roamed: Visiting "The Misfits" Shooting Set

Savlov visits the set of John Huston's "The Misfits" 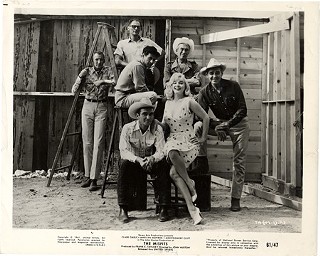 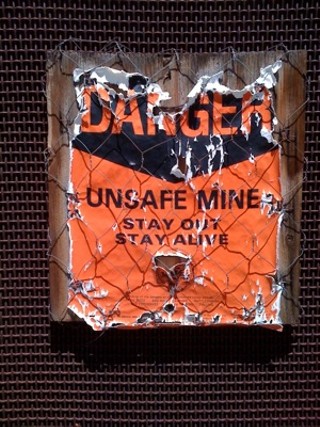 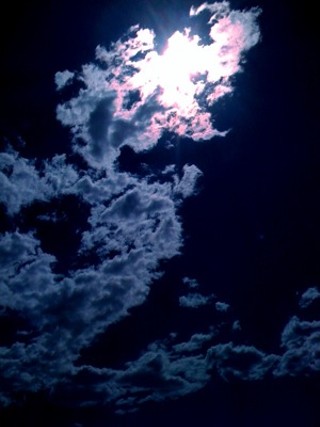 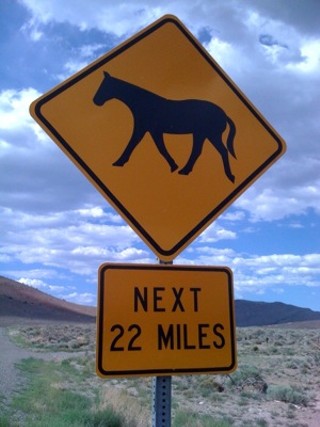 Cast and crew of John Huston's "The Misfits." Screenwriter and Marilyn Monroe's ex-husband, Arthur Miller, is at top, with glasses.

It's desolate, arid country out here. Nothing much to see. Nothing much to do. Scrubby little knots of bone-brown brush and tufts of spiny desert thistle dot the landscape, which rises in slow-building slopes before descending down to flat patches of silty playa. All around are the foothills of the Sierra Nevada and above that, like whitecaps on a dead blue sea, are sprawling puffballs of cumulonimbus clouds, still and magnificent. One of them takes on the form of a rampant Chinese dragon, belching fire from a toothy maw as the scorching, 90-degree sun punches through it like the atom-splitting white flash illuminating Frenchman Flats, circa 1951.

According to my GPS, I'm standing dead-bang in the midst of Misfits Flats, Nevada, just outside of Silver Springs, six miles off IH-50 down a haphazard hardpan nightmare of a trail that barely earns the name Break-A-Heart Rd. ('Break-An-Axle Rd." is more apropos.) I'm roughly 30 outside of Reno, Nevada, proper, but it resembles nothing so much as Cormac McCarthy's The Road, minus the dread. In fact, it's almost peaceful.

This is where director John Huston, during the summer and fall of 1960, shot several key sequences of his dead-or-dying-in-the-west masterpiece The Misfits. There's nothing whatsoever to mark the historic cinematic event; no plaque, no signs, not even a calcified hoof-print in the dirt thin, shifting sands. But a sudden whip of nowhere wind bears silent testament to the ghosts that haunt this particularly uninviting stretch of Nevada range: Clark, Monty, Marilyn, Thelma Ritter, Kevin McCarthy, and Huston himself.

Up ahead, surrounded by nothing much at all, are three distinct, moonscaped mini-playas, their whitish, high-alkali soil as fine as talcum power. Right now it's a treacherously dry 97 degrees Fahrenheit, and, apart from the occasional skittering of an invisible lizard, completely silent. Not even the omnipresent chuff 'n' grind of the big rigs gearjamming up on IH-50 reach this far out into the of the Nevada desert. It's the Big Empty as dead man's sepulcher. Nobody loves this place, it seems.

Except the wild horses, who still thrive in the area, just as they did when Gable exerted himself to the point of exhaustion while roping on-set nearly half a century ago. (He died in Los Angeles, after suffering a massive heart attack, 12 days after the film wrapped.)

As for those horses, you can spot them at dawn, grazing in groups of 10, 15, 20. Sometimes the Mustang stallions bolt, galloping up over ridges, out of sight, hooves kicking up dust-devils and flattening precarious desert tarantulas. They spook easily and from a long ways away; the mares foal up in the foothills. The Bureau of Land Management estimates that there are roughly 16,000 feral horses in Nevada, with the majority spread around Reno and Sparks, in Storey County.

Watching them stream across the foothills, even from a mile away, is like staring through a rip in time: there are so many of them, and they are so wraithlike, so mysterious, so wild. They are the only remnants of the old West you can find without a cheap $10 tourist map, or a $5 ticket to a no-dollar sucker-joint. (For that, try Virginia city.)

The horses caught Arthur Miller's eye in 1959. He was in the area recovering from his divorce with Monroe. Impressed by the taciturn ways of the range-men and cowboys who'd show up in Reno's casino's and dime-a-dance halls in their threadbare finery every weekend, he first penned a short piece, then expanded it into what would eventually become the shooting script for The Misfits.

The story of the film parallels the topography. Precipitous peaks awash with rock slides -- Nevada State Highway 451 is nothing if not serpentine and vetical -- and worse. What's left of the gentleman cowboy has now become, as I witnessed, a toothless old wildman, hooting and hollering in his front yard as I drive slowly by, a plastic, 1/2 gallon jug of vodka upturned and spilling all down his excitable front. (Or so his wife/lover/whore said, shrieking at me to "move along, nice ass!")

As for Misfits Flats, though, it's still here, a sweet spot in the middle of what looks like the end of the world. I can't wait to return. 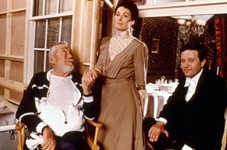 Holiday Viewing: The Dead
The shadow of Christmas past hangs long over Huston's classic