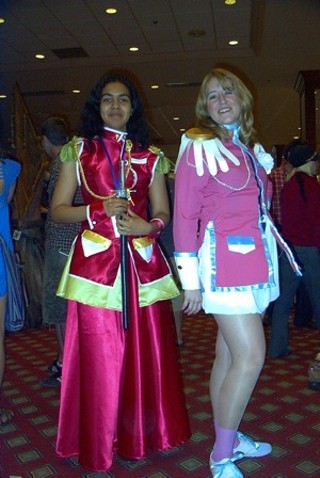 Every year, Texas has the honor of hosting the longest-running anime convention in North America: Project A-Kon. I go every year. For three days, a Dallas hotel hosts more than 10,000 attendees attracted by A-KonÕs eclectic mix of parties, games, concerts, and Japanese animation in a grand celebration of anime and sleep deprivation. Anyone expecting wall-to-wall geekery at an A-Kon is sure to be surprised at how diverse the crowd and its interests are, and itÕs this diversity that brings me back again and again.

In the United States, animation is largely limited to sitcoms and childrenÕs shows. In Japan, it encompasses all genres, especially science fiction and fantasy. It is this cross-genre nature of anime that gives it such wide appeal and attracts such a variety of attendees to Project A-Kon. There is the geek stereotype, to be sure Ð introverted teens and young adults opening up in the company of their own kind Ð but there is also the older crowd who were into anime before anime was cool, professionals and parents who may have kids to bring, to get the next generation hooked. A-KonÕs programming has something for every kind of anime/SF/fantasy fan: Players of video, board, and roleplaying games congregate in the gaming rooms, collectors scope out merchandise from all over the world in the dealers room, aspiring artists and writers attend panels on honing their craft or sell their wares in the comic market, and everywhere there are the costumers.

This is no Star Trek convention, where one can improvise a Vulcan with a blue shirt and plastic ears and be set. A-KonÕs costumers take their work seriously (myself included ÐÊmy contribution to the convention was making for a friend a red dress from Revolutionary Girl Utena, a show that some say has subtle lesbian overtones). On a stroll through the convention hall one may encounter Silent HillÕs Pyramid Head, Alice and the White Rabbit, gothic maids, ghostbusters, and Jedi knights, Master Chief from Halo, the cast of characters from Naruto, steampunk characters geared up in the most advanced 19th-century technology, a werewolf, a princess, the Survivors and the Infected from Left 4 Dead, Rorschach of Watchmen, Jesus Christ, and oh so many traps. WhatÕs a Òtrap,Ó you ask? A trap is a male fan who is costumed as a female character (females dressed as male characters are often called Òreverse trapsÓ). It is perhaps a mark of gradually improving gender equality in anime, science fiction, and fantasy that young men are willing to dress as their favorite heroines; a generation ago even girls didnÕt want to play the typical female character of the day.

Given the conventionÕs roots in anime fandom, it is surprising that the weakest part of Project A-Kon is the anime viewing itself. Schedules for the three screening rooms are thrown together haphazardly, with material often added or dropped at the last minute; thereÕs no grouping of viewing material by genre or target audience to create blocks of related screenings; there are no descriptions of shows to be screened, only their titles; and thereÕs no cross-promotion with video dealers who have brought their inventories to the convention. In an Internet-connected world, perhaps that level of planning and promotion is unnecessary Ð fans may have already read about a show which interests them or seen clips online, and know what they want to see. I am not so connected, and thus I had no idea what to watch.

On the other hand, one of the best aspects of A-Kon is the comic market, where semi-pro artists and craftsmen set up shop and sell fan-produced works. Rather like the Japanese dojinshi (self-publishing) model, derivative works sell in small enough numbers to avoid copyright troubles, while original works gain their creators visibility for their projects, whether it be a webcomic or fantasy art or handcrafts. Most of the artists and craftsmen present will be happy to accept commissions for custom work. ThatÕs something that one canÕt get in the dealers room. It is to the dealers room that attendees seeking to expand their DVD collection, or acquire hard-to-find toys, books, models, games, and the like will go. I prefer the comic market, where one may reward the good with cash (and punish the bad with indifference).

The meeting rooms which host panel discussions also cater to the creative attendee. There are discussions on art techniques, computer graphics, voice acting, writing fiction, costume manufacture, and the like Ð and of course the pure fun of discussions on giant robots beating the crap out of each other. Dr. Susan Napier (formerly of UT Austin, now director of Tufts UniversityÕs Japanese program) is a frequent A-Kon guest, and her panels on the cultural impact of anime in Japan and in the West leave one watching the crowd, aware of the unique blending of numerous subcultures that A-Kon provides. IÕll be back to mingle with this crowd the first weekend of June, 2010, so if you wish to attend with me and release your inner fan, mark your calendar.