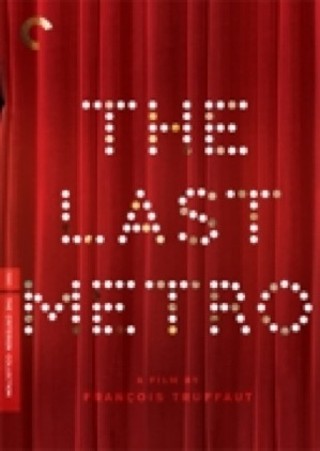 Love conquers all. Even Nazis.

François Truffaut died young, with his heart on his sleeve, and his best films still exude that youth from every angle. It's a precocious sort of youth, wise and heartachey and gracefully melacholic, yet still vital and ready to fight for l'amour, come what may.

Auteur theory or not, François Truffaut's often bleak world view never fully hardened into anything approaching the sensual cynicism of his nouvelle vague contemporary Jean-Luc Godard. Watching The 400 Blows, Jules and Jim, or The Last Metro (his final truly outstanding film) remains an emotionally embracive experience. Watching Godard's anything keeps on feeling abrasive, although if you're lucky it's the provocative, violent abrading of politicized sensuality: Pierrot's heart makes him le fou, and the Pope hated Hail Mary. Not so with Truffaut, or at least not so often.

The Last Metro, which was nominated for an Oscar (it lost to Vladimir Menshov's Moscow Does Not Believe In Tears if you can believe it) and swept the French Césars, is a riot of big time sensuality, and Criterion's impeccable dual-DVD release, fully restored from a high definition digital transfer looks and sounds impeccable.

It's one of Truffaut's most visually arresting films, not least of all because of its' lead, the luminous Catherine Deneuve. Granted, that's like saying a it's gorgeous day outside because the sun is so brilliant, but cinematographer Nestor Almendros lights the actress as though she were a beacon of love and hope in a world gone drab.

And, for Paris, it is indeed a dark time: it's 1942 and the Nazis have occupied Paris, where Marion Steiner (Deneuve) is the acting head of the Theatre Montmartre. Her Jewish husband Lucas (Heinz Bennett) has apparently fled the City of Light for less politically treacherous territory, and Marion has taken over the banal daily realities of keeping the theater functional in the face of increasing hostility. As she prepares to mount her husband's final play, the indelicately-titled Disappearance, she must also contend with a menagerie of theater types, including an actor new to the repertory cast, the unapologetically randy Bernard (Gerard Depardieu), who is first seen in a comical sidewalk pas de deux, attempting to pick up a thoroughly unimpressed Marion.

Truffaut steals a page (or two) from Ernst Lubitsch's To Be or Not to Be, but the that director's famous "touch" is absent from The Last Metro, replaced by a more sombre (but no less lovestruck) tone that envisions the Theatre Montmartre as one of the final artistic bulwarks against the culture-obliterating Nazi machine.

Even more annoying than the Germans, however, are the French collaborators, here represented by the unctuous theater critic Daxiat (Jean-Louis Richard), who attempts to assure Marion that he is a great admirer of her husband's work but later espouses anti-Semitic propaganda via the airwaves and his column in the collaborationist newspaper, Je Suis Partout ("I am everywhere).

But all is not as it seems: Lucas Steiner has *not* fled his beloved theater and is instead living in the cramped cellars below the stage, bedeviled and wild of countenance, a comically tragic riff on Gaston Laroux' subterranean phantom. To ease his torment and aid his theater, Steiner eavesdrops on rehearsals via the buildings heating ducts, taking notes and passing them on to Marion, who in turn passes them on to the cast and crew, among them Sabine Haudepin's gamine ingenue Nadine and Jean Poiret as the gay theater director Jean-Loup Cottins.

Set against a soundtrack built upon various renditions of Edith Piaf's Mon amant de Saint-Jean (including one by French chanteusse Renata Tebaldi), Truffaut's film is a love letter to the theater (much as Day for Night was for cinema).

But it's also very much in tune with the schizophrenic nature of acting itself. Duality is everywhere: the characters and the actors who play them; occupied Paris and the Free France resistance; Daxiat's perfidious love/hate relationship with both the Jews and his own critical self; the floorboards and Lucas Steiner's cramped quarters below.

Love triumphs in the end, of course, but along the way Truffaut explores the nature of love during wartime and the essence of both Melopomeme and Thalia, tragedy and comedy. Lush and romantic with occasional stylistic nods to the director's origins in the nouvelle vague (the film begins and ends with overlapping sequences of both real and staged period footage), The Last Metro was Truffaut's last masterpiece. In keeping with its theme of duality, it's both a pop confection and a cunning statement on the importance of maintaining a semblance of artistic creativity (if not normalcy) when confronted by the worst the real world has to offer. It's not just your sanity that's at stake, Truffaut observes, but also your heart.