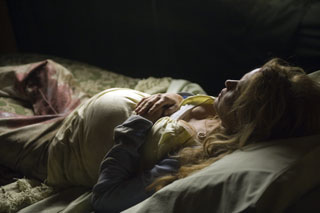 Paul Solet, director and screenwriter of the post-natal splatterpunk shocker Grace, obviously knows what he want an audience to take home with them after seeing his film: nightmares. And not just any nightmares, either, but the pre-partum sort that can derail an impressionable couple's decision to procreate, or trust a midwife, and which pretty much calls into question the whole of the American birthing process in all its gory glory.

Jordan Ladd is Madeline Matheson, an upper middle class wife with an upper middle class husband, Michael (Stephen Park) who, after years of trying, finally conceives. Having already determined to usher her little miracle into the world with the assistance of M.D.'d midwife Patricia (Samantha Ferris), Madeline's once-upon-a-time Univeristy mentor-cum-lover, the expectant mom foresees nothing but the joy of impending motherfun.

Nevermind that her shrewish mother-in-law Vivian (Gabrielle Rose) is violently opposed to this non-traditional route, or that her husband has his own, vague, misgivings. No one ever said childbirth was ever anything other than painful, bloody, and -- to men, at least -- often downright horrific.

The point is moot, however, as a tragic automobile accident leaves both Michael and his wife's in utero offspring dead on arrival. Madeline survives, though, and amidst the madness of the hospital's natal-trauma unit, she makes the ultimately unwise decision to birth the stillborn tot at Vivian's holistic midwife center. There, the dead infant -- christened Grace -- miraculously returns to cooing, drooling life, to the hysterical delight of its mother. Slow-burning horror ensues.

Solet wears his genre influences on his sleeve: echoes of David Cronenberg's The Brood bubble up throughout, as do multiple references to Rosemary's Baby. Once Madeline retreats to the now-oppressive homestead, her grey little baby starts drawing flies and thirsting for something considerably more viscous than Similac.

Solet has a real flair for creating genuinely disturbing imagery. (A nursery sporting coils of creepy-crawly flypaper dangling from the ceiling in lieu of the usual soothing mobiles is the least of them.) And Ladd gets kudos for pulling off one of the most heartbreakingly repellent mother-love manifestos yet attempted.

But there's something about Grace that strikes even a jaded genre fan such as myself as being a tad too vile for vile's sake. A borderline mysogynistic subplot involving Rose's ma-in-law from hell dovetails with an equally off-putting characterization of the gay Vivian. I get Solet's extremely graphic point that love -- in all its warped, dysfunctional familial forms -- can literally be hell, but there's a nastiness to Grace that goes beyond the gruesome subject matter and leaves you pining for the relatively innocuous dead baby jokes and sick humor of Lenny Bruce (who is, doubtless, laughing from the Great Beyond).