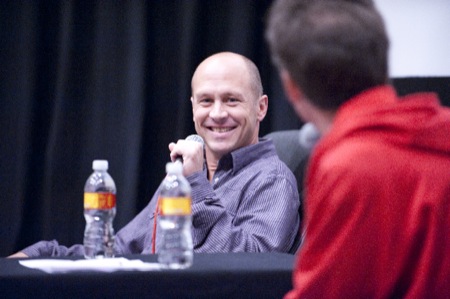 Here's a twist on the old Zen brain-teaser: When a piece of office equipment falls in the city does it make a sound? The answer is a resounding yes if it it occurs in front of the Paramount Theatre just prior to the 10-year anniversary celebration of the release of Office Space, Mike Judge's hilarious send-up of cubicle culture. I couldn't see what was happening through the multi-ringed throng of people surrounding the sidewalk sacrifice, but the sound of smashing metal and punctured plastic was unmistakable. Co-sponsored by the Fantastic Fest and SXSW, the demolition was inspired by the hallmark scene in Office Space during which the principals maliciously violate a malfunctioning copier, the preshow event was a cathartic warmup to the evening. Inside the packed theatre, the audience cheered as each character appeared onscreen. The communal anticipatory laughter indicated just how frequently this DVD bestseller has been viewed at home. A bust during its commercial release, the DVD has gone on to become Fox's golden goose. The reasons for this still defy perfect explanation. The huge audience response certainly seemed revelatory to the 10 or so cast members (many of whom hadn't seen the film in 10 years), who reunited onstage after the screening. Among those in attendance were John C. McGinley, Stephen Root, Gary Cole, David Herman, Ajay Naidu, Diedrich Bader, Paul Wilson, and others. When asked during the Q&A if he would do anything different if he were to make the same film with the same budget today, Judge replied that the only thing different is that he would no longer be able to afford Scrubs star McGinley. 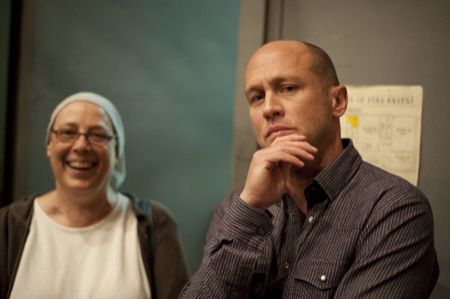 Out-of-towners and locals unable to get into the sold-out happening last Sunday should take note: The screening (with Mike Judge in attendance, but minus the cast appearances) will be repeated during SXSW, though the date is yet to be announced. Some lucky students in John Pierson's UT Master Class had the rare opportunity the day after the screening to welcome Judge in their class for two hours (where the pictures above were taken). For two hours he discussed his unusual career path (from physics to rock & roll to animation) and answered questions from the students. It was a rare opportunity to hear at length from the laconic Austin resident and creator of the institutions, Beavis and Butt-head and King of the Hill. Look for a new feature, tentatively titled Extract, to be released by Judge later this year, as well as his new TV show, The Goode Family.