In case you haven't heard the news, a newly released audio tape of Christian Bale is making the rounds, and boy howdy is it a blast.

Apparently unaware that his mic was hot, the already too-intense-for-his-own-good actor launched into a lengthy, epithet-laden outburst while on the set of Terminator: Salvation. The unfortunate target of his rage was DP Shane Hurlbut, who likely has some form of PTSD (that would be Post Terminator: Salvation Disorder), so vicious was Bale's harangue.

Fittingly, however, the web has bitch-slapped Mr. American Psycho right back: musician and producer RevoLucian has remixed the verbal assault into a borderline addictive club track that's sure to be a floor-filler for at least another 72 hours, or until Mel Gibson finally breaks down and joins Hamas, whichever comes first. The mashup, dubbed "Bale Out", is available for listening on RevoLucian's Myspace page or as a free download via his Twitter. 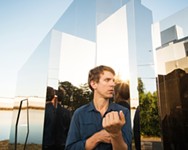