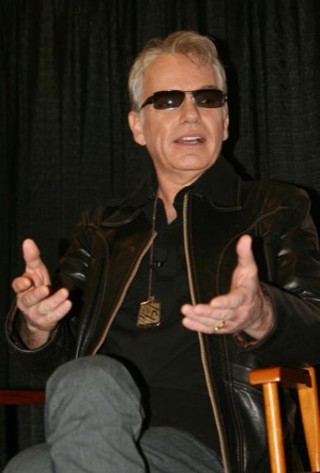 Press release after the jump.

(Austin, TX) - The Austin Film Society (AFS) is pleased to announce that Billy Bob Thornton will be inducted into the Texas Film Hall of Fame as an honorary Texan at its ninth annual celebration on Thursday, March 12, 2009. Thornton is an accomplished actor, musician and writer. His credits include MONSTER'S BALL, ARMAGEDDON, THE ICE HARVEST, BAD SANTA and SLING BLADE, for which he won an Academy Award for Best Adapted Screenplay and was nominated in the Best Actor for his performance as the mentally challenged Karl Childers.

While Thornton was born in Hot Springs, Arkansas, it is his quintessential Southern "bad boy" image that calls to mind Texas and his great contributions to Texas film that have earned him induction into the Texas Film Hall of Fame. He starred in FRIDAY NIGHT LIGHTS, filmed at Austin Studios, and THE ALAMO, filmed near Austin at Reimers Ranch, in which he played Davy Crockett, the famous frontiersman who became a hero of Texas after dying in that battle. Thornton has worked alongside Texas Film Hall of Fame inductees Bill Paxton in A SIMPLE PLAN and ONE FALSE MOVE; Richard Linklater in BAD NEWS BEARS; Robert Duvall in THE APOSTLE and A FAMILY THING; and Ethan Hawke in FLOUNDERING. Thornton's Texas roots go back to his start as a musician in the early 1980s after performing at Houston's Carti's where ZZ Top manager Scott Weiss saw the band and urged them to form Tres Hombres, a ZZ Top tribute band named after the break-through album.

Thornton will be inducted by his co-star in THE ALAMO and Texas Film Hall of Fame inductee Dennis Quaid. A Houston native, Quaid has a long and illustrious list of film credits including THE ROOKIE, IN GOOD COMPANY, WYATT EARP, ANY GIVEN SUNDAY and the critically acclaimed FAR FROM HEAVEN, for which he won an Independent Spirit Award and New York Film Critics Circle Award for Best Supporting Actor.

John Cusack will present the award to Catherine Hardwicke. Cusack rose to stardom in a string of mid-80s teen movies, now cult classics, including BETTER OFF DEAD, THE SURE THING, SIXTEEN CANDLES and Cameron Crowe's SAY ANYTHING. His later hits include GROSSE POINT BLANK, HIGH FIDELITY and MUST LOVE DOGS starring opposite Diane Lane.

Thomas Haden Church, an El Paso native, will emcee the ninth annual awards ceremony. In addition to his Academy Award nomination for his role in SIDEWAYS, Church has appeared in such films as SPIDER-MAN 3, SPANGLISH and ROLLING KANSAS, his directorial debut, which he also wrote.

Austin Film Society promotes the appreciation of film and supports creative filmmaking by screening rarely seen films, giving grants and other support to emerging filmmakers, and providing access and education about film to youth and the public. Through Austin Studios, which AFS opened in 2000 in partnership with the City of Austin, AFS helps attract film development and production to Austin and Texas. Gala film premieres and the annual Texas Film Hall of Fame Awards raise funds as well as awareness of the impact of film on economy and community. The Austin Film Society is ranked among the top film centers in the country and recognized by the National Endowment for the Arts and Directors Guild of America