Gone but not forgotten

Of all the vanished video stores in Austin's storied VHS culture, the one we miss the most has to be Pedazo Chunk, which opened in 2001 in a tiny (and boy do we mean tiny) space 2009 S. First St. across from Sinsations) before moving approximately thirty feet to the left and re-opening in a considerably larger space in June of 2004. Managed and owned throughout its short life span by Dannie Knowles and her beau José "Lobo" Ramirez, Pedazo Chunk was, simply, the shit.

With its emphasis on then-obscure, Region-3 Asian DVDs, Spanish-language titles, and featuring a wealth of VHS treasure, Pedazo Chunk was the epitome of the neighborhood video store hangout. They had their own digital screening room, hosted regular parties for local filmmakers (among them a then-twelve-years-old Emily Hagins, of Zombie Girl: The Movie fame) and best of all, the store came complete with an enormous back deck, replete with Tiki torches, the comforting burbling of Bouldin Creek in the background, and plenty of film fans and luminaries -- Quentin Tarantino, Tim McCanlies, Elijah Wood -- lazing about, shooting the breeze, and arguing the merits of CGI vs. stop-motion. (Harryhausen's camp always won, natch.)

It's gone now, no more than another in the increasingly lengthy list of Vanished Austin venues that includes Les Amis, Liberty Lunch, and Randy "Biscuit" Turner (whose art opening/wake was held at PD on Fri., August 16, 2005; it was so successful/happy/sad that the APD showed up to mourn and/or harass Big Boys fans). Pedazo Chunk, which ceased operations in 2006, was a major hub in our life as both Austinites and cinéastes. And it was a place where, to a much larger degree than elsewhere in Austin, VHS still ruled the hearts and minds of its clientele.

Accordingly, we chatted up Dannie Knowles' older-but-not-cooler brother Harry in conjunction with our recent piece on Netflix vs. indie video stores. As usual, Harry came up with some spot-on observations. Here's a few of them....

Austin Chronicle: So. Netflix. Evil from beyond the stars, or an easier way to get your movie-life in order? Discuss.

Harry Knowles: I think what it really comes down to is that Netflix affects any sort of growth possibility for places like Vulcan or I Luv Video. If you're a kid and your parents get you a Netflix account, be it auto-download or whatever, you tend to stick with however you get introduced to the pattern of seeing films. Let's face it: one of the reasons that you and I are part of the "video store generation" is because our parents took us to video stores when we were young and we got used to discovering movies in that format. And then there was that wonderful, wonderful day when we discovered something beyond Blockbuster, which typically happens through your college years. For those of us in our thirties and beyond, that day remains a fixture in our mind and a landmark in our lives.

AC: Do you get a lot of feedback from your readers on the whole Netflix issue?

HK: I know that a lot of people who read my DVD picks-of-the-month and use it as their Netflix queue. They'll sit there and identify what they want to buy and then get the rest via Netflix. And that's pretty much how things are going. Locally, places like I Luv Video and Vulcan are going to be fine. The whole "Keep Austin Weird" crowd will never stop going there or, for that matter, going to the Alamo Drafthouse.

I look at it beyond Austin. When I was growing up in Seymour, Texas, population 3,000, there was one mom and pop store that would have one new release a week and otherwise had an astonishing array of John Wayne titles and Clint Eastwood movies, you know? But because my parents were video geeks, I had 3,000 to 4,000 titles at home. But I was very "Abby Normal" in that way.

Today, what we have right now is a generation of kids growing up that can essentially explore all of the titles ever released. That is kind of remarkable. What's important, however, is that they discover how to find those titles, which is one of the reasons I do my DVD column on Aint It Cool News. I talk about some new releases, sure, but there's around 300-400 titles being released weekly now. And deep down amidst all those release cycles are a lot of really cool titles which people should seek out.

That's why places like Vulcan and I Luv Video are so amazing. They've got people behind the counter who are as religious about film as anyone in the world. And they're there to answer the questions of, say, burgeoning film-school students at UT or whomever. You don't get that personal attention or back-and-forth online.

AC: So what do you think the future holds for the indie video outlet?

HK: Probably a lot less stores and a lot more warehouses. The online market is just so strong, and that goes for everything, not just video. Stores that are smaller than Vulcan are going to have issues unless they diversify. What's cool about Vulcan and I Luv Video is the fact that they've been esoteric for 25 years now. And when you've been around that long you have such an amazing backlog of not just titles but also pure knowledge about film. I'm not worried about Austin's weird places. It's all the places that don't have the supercool video stores like ours that I'm worried about

HK: Right. If you're only shopping online, you lose the community that community spirit. Speaking for Aint It Cool News and the sense of community we foster, we've had, officially, seven marriages that came about because of this film geek community, be it online on Aint It Cool or in video stores like Vulcan and I Luv Video. And that's not something you're ever going to see come out of Netflix. 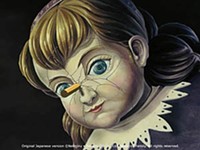