A few months back we were trolling French eBay searching for some trés chic, dans la Metro-sized film posters that they do so well, when we came across the oddity pictured above. It's the French one-sheet for Samuel Fuller's lost masterpiece White Dog. Needless to say, we snagged that sucker for 40 Euros and promptly plastered it to our wall.

Co-scripted by future Oscar-winner Curtis Hanson, Fuller's film is an anti-racist cri de coeur revolving around a stray German shepherd trained to attack and kill black people. Paramount Pictures had expected something along the lines of "Jaws on paws," but, Fuller being Fuller, what they got was something altogther different and far more challenging. Nonplussed, Paramount shelved the film prior to its scheduled release in 1982 and that was that until a brief art-house run a decade later. [You can read Marjorie Baumgarten's review here.]

Lo and behold, Criterion, always ahead of the pack, has just resurrected the film in a sparkling new DVD edition with a pristine print, a snarly documentary ("Four Legged Time Bomb"), and more.

The irony, of course, is that White Dog has finally received the attention it so richly deserved 27 years ago just as the country that birthed it prepares to swear in its first African-American President. We're pretty sure Sam Fuller would've appreciated that. We certainly do. 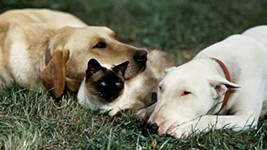