SXSW Film announces the premiere of a new Seth Rogen comedy, as well as new panelist and docs 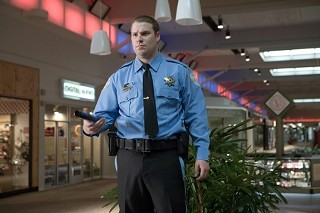 Seth Rogen in Observe and Report (photo by Peter Sorel)

January has very little to recommend it – it heralds the season of dogs at the moviehouse (literally and figuratively) – but at least from SXSW Film we get the beginning of what I like to call The Long Tease, a deliciously slow reveal of all the goodies it’ll be showing come March.

SXSW kicked it off today with an announcement tantamount to an, ahem, soupçon of skin (no more strip metaphors, I swear). First off, there’s Centerpiece comedy Observe and Report, which stars Seth Rogen as a mall security cop embroiled in a turf war with the (real) boys in blue. It was written and directed by Jody Hill, whose underground hit The Foot Fist Way was enthusiastically proclaimed to be the funniest fucking film ever made by no less than Will Ferrell.

Also announced are a slew of panelists, including Twilight director Catherine Hardwicke (who’ll be inducted into this year's Texas Film Hall of Fame), Austin elder statesmen Mike Judge and Robert Rodriguez, SXSW wunderkind Joe Swanberg, and – how cool is this? – trailer-maker Mark Woollen (whose work on Milk electrified me in a way, frustratingly, the film itself never did).

Wait, there’s more! SXSW, which has built a reputation as a premiere showcase for top-notch docs, has also leaked the names of a number of documentaries playing this year, including one about homegrown rabble-rouser Alex Jones (New World Order) and a new film from Gary Hustwit, who made the weirdly addictive Helvetica. (Who knew font was so hot?)

Press release after the jump…

Austin, Texas -- January 12, 2008 – The South by Southwest (SXSW) Film Conference and Festival announced today additional titles and guest speakers for this year’s Festival, March 13 – 21, 2009 in Austin, Texas. Among the new titles unveiled is the Warner Bros. Pictures release “Observe and Report,” which will premiere in the Centerpiece slot on Monday, March 16th.

Written and directed by Jody Hill (“Foot Fist Way”), “Observe and Report” is a dark comedy starring Seth Rogen (“Pineapple Express,” “Knocked Up”) as Ronnie Barnhardt, a deluded, self-important head of mall security who squares off in a turf war against the local cops. Opening wide on April 10, 2009, the film also stars Anna Faris, Michael Peña and Ray Liotta, and was produced by Donald De Line and executive produced by Andrew Haas, Marty Ewing, Thomas Tull and Jon Jashni. Rogen previously attended the 2007 Festival with the world premiere of “Knocked Up,” which went on to gross nearly $150 million in its domestic release.

Long known as a banner destination for compelling documentary films, the lineup for the 2009 SXSW Film Conference & Festival will include:

“Objectified” – From acclaimed SXSW alum Gary Hustwit ("Helvetica") comes a new film that documents the creative processes of some of the world’s most influential industrial designers, and looks at how the things they make impact our lives. What can we learn about who we are, and who we want to be, from the objects with which we surround ourselves?

“New World Order” – Directed by SXSW alum Andrew Neel, this documentary about conspiracy theorists is a behind the scenes look at the underground anti-globalist movement. The film chronicles celebrity radio host and underground cult hero Alex Jones, (of “Waking Life” and “A Scanner Darkly”), and other conspiracy theorists on their ceaseless quests to expose the 'massive global conspiracy' that they believe threatens the future of humanity.

“Winnebago Man” – Jack Rebney is the most famous man you've never heard of – after cursing his way through a Winnebago sales video, Rebney’s outtakes became an underground sensation and an online phenomenon seen by millions. Filmmaker Ben Steinbauer climbs to the top of a mountain and goes deep into the woods to find the recluse who unwittingly became an Internet superstar.

“RiP: A Remix Manifesto” – Web activist and filmmaker Brett Gaylor explores issues of copyright in the information age, mashing up the media landscape of the 20th century and shattering the wall between users and producers. Gaylor's documentary features artists like Girl Talk, who employ mash-up techniques, mixing samples of existing music into new songs. Interviews with additional artists, lawmakers, companies and consumers are interspersed with animation, archive footage and collages.