The Chron's film critics preemptively go on the defensive 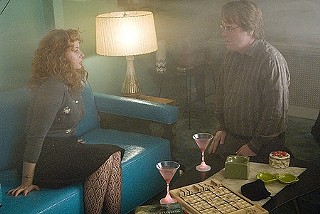 Smoke Gets in Your Eyes: Synecdoche, New York

By and large, the big studio pictures didn’t do bubkes for me this year. That might sound like the regular grumblings of some art snob, but believe you me, I love a big, expensive, studio to-do – the epics, the adaptations, the serious dramas Hollywood only seems to put out when we’re rounding awards season. But again and again, they just fell flat for me. Gran Torino was a joke, Benjamin Button a bore, and Milk should have been so much more (which is not to say that, as is, it isn't a hell of a lot). Slumdog was a slick feel-gooder that left me tepid (sweet dance, though). Frost/Nixon was a well-executed, satisfying film, and that's fine. And sure, The Wrestler had a terrific performance by Mickey Rourke (surprisingly emotive for a face so reconstructed it looks like you could stick a pushpin through it and still not make a dent) and a loose, lovely camaraderie with the other wrestlers – but its arc was paint by numbers. (An estranged daughter? Stripper with a heart of gold? Garrr.)

So 2008 didn’t have the kind of films that got a universal nod – no There Will Be Blood, no No Country for Old Men, no Lives of Others. But I liked 2008 even better, because what we got – at least from the foreign and arthouse offices – were demanding and dividing movies. Ask any critic and they’re bound to start frothing over that one or two or three movies that set them on fire this year; ask the next critic and you’ll get a good lather over three totally different movies. (It’s also worth noting that in the end-of-the-year crush, we’re watching anywhere from 1 to 3 movies a day; screening fatigue for me set in about a week ago, which is why I still haven’t seen Che or Doubt or Gomorrah or My Winnipeg. Just… step off, alright? I’m dancing as fast I can.)

But even those – the regrettable passes – say something about the individual critic. These Top Ten lists – from four of the Chronicle's critics, located here – these lists are as intimate a lens you can get into the hidden heart of a critic. (And goodness, I really do love making these lists, but then I'm the kind of a girl who'll wake up and put "take a shower" on a to-do list just to have something to neatly number, then cross off.) But the vocabulary’s all wrong for these Top Ten lists: I wouldn’t presume to argue that my list marks the top films, the best films, put out this year; they’re my best. (I will say, however, that it makes me absolute bat-shit crazy that the Austin Film Critics Association named The Dark Knight its best movie of the year. Glad to be in the club, guys, but seriously: It BURNS.)

As for my list: These are the movies that knocked me around, kept me up late at night and into the morning. They’re the ones I went to sleep thinking about and woke up with them still buzzing around the brain. These are the ones that made me punch the air in triumph, or grin till I thought my face would split (I remember driving home from Son of Rambow, smiling like a doof and saying “that was just really, really sweet” over and over again to an empty car). Two of the films on my list made me weep – actually weep! – while others had me jazzed, energized in that giddy way great movies can make you, even – sometimes especially – the downers.

Up with film, eh?

So what was I must up with? Well, twice this year I declared – with something of the ferocity of a stricken schoolgirl – “I am in love with this movie.” Guess what? They’re number 1 and number 2 on my list. I’ve already waxed rhapsodic about A Christmas Tale. As for Synecdoche… Well, Synecdoche’s special. To be honest, sometimes it felt a little like a sickness. The first time I saw it, it rattled and depressed me. The second time I saw it, it sent me reeling in the other direction -- made me feel alive. I passed on a chance to see it a third time at the Paramount during the Austin Film Festival, because I wasn’t yet ready to change my relationship with the film (I’m not sure I ever will, honestly) – and I think the word relationship is telling. We’re not watching these movies in a vacuum. Our love for them has everything to do with who we are as people, and the movies we choose to love say almost as much as the people we choose to love.

There’s already been a pretty healthy debate on our boards over Synecdoche – if ever a film were demanding, and dividing, this is the one. I'm thrilled to bits that our collective ranks at the Chron voted it number one of the year.

And let the anti-Synecdoche flaming begin…