At Home in the World of One's Woes, And It's a Wide, Wide World

The nitty-gritty of what speaks to us and why 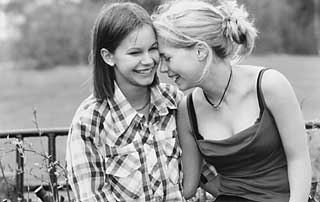 This will make more sense after the jump.

As if we needed any more evidence that the gloves were off but good, you attack my beloved This American Life? Christ, man, have you no shame? I’m not going to linger too long on this, for one, because this isn’t RADIO Fight (but wouldn’t Terry Gross versus Click and Clack make a delicious kind of death match?), but also because I’m not sure you’ve ever actually listened to the program, otherwise you wouldn’t have just knee-jerkedly confused its listenership – which I reckon probably is mostly middle-class and white – with its content, which is far-ranging and far more substantial than the musings of the occasional self-deprecating contributor. (And what’s so wrong with self-deprecation? David Rakoff and Jonathan Goldstein do a crackerjack job of it.) Quiet desperation isn’t limited to “the charmingly insecure chattering classes” – and I think This American Life does a fine job of limning desperation of all class, color, and creed – but neither should the desperation of those so-called chatterers be shunted aside as meaningless.

Jaysus, we’re all in the gutter – if that isn’t cause for unification in commiseration, I don’t know what is.

And yet, to go back (and read back to know exactly what Josh is talking about): “They're tiny little demons, but they'll eventually eat you alive with imperceptible bites.”

I think that’s beautifully put, Josh, and it made me stop in my tracks. Which, embarrassingly, doesn’t happen all that often – the rising to the surface of a stirring idea, an elegantly worded thought, one that puts a temporary brake-stop to the constant consumption – thanks, Internet! – of words, facts, figures, images, polemics, parodies, and icanhascheezburger forwards.

I think the lumping together of Wes Anderson, Noah Baumbach, and David Gordon Green is a cheap shorthand. (Wait, you forgot David O. Russell!) I think that each of those men (all four of ‘em) have produced brilliant works, but they’re very different filmmakers. Whether or not they all end up at an end station of melancholy (which I’d argue is in fact not the case), they take wildly idiosyncratic roads to get there. (Since you started the shorthand, I’ll follow up – Anderson is the eccentric, Baumbach the arch one, and Gordon Green the deeply sensitive, wounded guy. I don’t know what the fuck David O. Russell is. A little bit nutter, I suspect.)

But that’s all just gimmick – not theirs, but that of the critics, and maybe the audience. That’s the easy tag we put on "hipster" filmmakers who have inspired us and moved us… and also maybe disappointed us. Some of these guys, we fell in love with early on, then bristled at when we felt like they hadn’t evolved. I’m thinking mostly of Wes Anderson here, who continues to tread water with the same themes while upping the “quirk” factor. But the other three have absolutely matured and produced wildly different and distinctive works of art. I’d finger David Gordon Green as the one to watch – in my mind, he’s especially the one who was tagged early on as a boy wonder and has almost brazenly reinvented himself with every picture. (I’ve already sung his praises again and again –and I’m definitely kicking myself that I didn’t include him previously in my list of the best screenwriters around.)

Defense of those guys aside, I’d like to get back to the point you were trying to make when fingering them as mopesters hell-bent on dramatizing their childhood hang-ups. (And, by the way, what poppycock – who are we to presume we know what goes on in the mind of the filmmaker? Of that list, Baumbach is the only one who has produced baldly autobiographical work – and I’m fine with that. Just because you use your own life for material doesn’t make you a lesser filmmaker. We’re all self-absorbed – some of us just more nakedly than others. And I’d gladly watch Wes Anderson doggedly work through his father issues over some disposable Hollywood entertainment with a talking dog top-billed. And for fuck’s sake, why not make it personal? I don’t go to an art gallery to see someone’s paint-by-numbers; I want, in addition to obvious craft, to see a unique perspective, and if that involves multiple, but hopefully deepening, reiterations of the same theme, so be it.)

That was a hell of a parenthetical.

Right, so defense of those guys aside, my chief umbrage with you is in your dismissal of films that – what, too obviously strike a chord in you? That hit too close to home? But how too close to home are they, in fact? I don’t know about you, but my world looks nothing like those of this (nearing flogged to death) foursome we’re talking about. I’ve never wanted to fuck my mom (Spanking the Monkey) or sticky-finger bouillon from the Iraqis (Three Kings). I never slept with an underager high on hair spray to try to make meaning of being a twentysomething with an English degree (Kicking and Screaming). I’ve never run from the law, as a dope dealer (Pineapple Express) or a horny teen (Undertow). And while I may have fetishized The New Yorker growing up, Wes Anderson’s artists, academics, and sailors exist outside of my realm of expertise. (The high seas do look grand, though, don’t they?)

My point is, you’re reducing the enormity of what lies within each of these films to this perception of thinness because – dramatic or nondramatic landscapes aside – they resonate with you. The common thread is that they are all trying to articulate – often poetically – our inability to find love, to find happiness, to find fulfillment and some way of reconciling the hopeful way we want our world to look and the way it so depressingly actually does.

I also – and absolutely – believe in the ability of a film “foreign” to everything I know personally to make a personal impact. The scope of my world is very small, and yet I can find some communion with a film from Sweden, Turkey, Hong Kong, and rural North Carolina. But to say these films that are, by geography, wider than our comfort zone are better than the ones that hit closer to home is a falsity, and frankly, a reaction to middle class guilt. The “foreignness” of them is superficial; it may be told in a different language or a different landscape from that which is immediately recognizable, but it’s still the same struggle. To recap: to find love, find happiness, find fulfillment and some way of reconciling what you want with what you have.

Also: Y Tu Mama is totally mopester. So take that.

I Defy You, Ira Glass