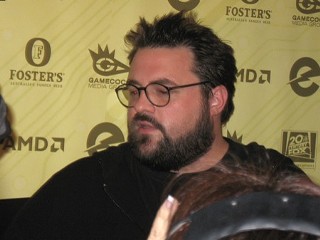 at next month's Austin Film Festival, where her film will appear in yet another opening-night slot). Following the screening, Smith was joined onstage by his producer and "best friend," Scott Mosier for a freewheeling Q&A. They were only shooed from the stage to make way for Fantastic Fest's next event: the world finals of the Air Sex Championships.