In 1986 Aliens delighted moviegoers with a simple recipe: more of the same. So what happens with so many of its sequential brethren? Yes, I’m looking at you, Lost Boys: The Tribe. And you, Garfield: A Tail of Two Kitties. And definitely you, Weekend at Bernie’s II. Maybe in the end we just appreciate the opportunity to respond incredulously. After all, Jurassic Park III did gross some 180 million. And last year I did leave my family on Christmas day to see the much anticipated AVP2. Don’t judge. It’s not easy defending new Rambo as you plan the month of October around the release of the newest Saw installment. The good news? If you can relate, then you can also find some comfort among friends this Sunday at the Alamo Drafthouse at the Ritz as they screen the winning selections from this year’s Unnecessary Sequel Contest… 2.

For the past two years the Alamo has challenged local filmmakers to out-unnecessary Battle for the Planet of the Apes. Last year’s winning submission, "Schindler’s Lists," written and directed by Aaron Dixon and Stephen Huff, features a post-WWII Schindler (Steve Hatala) as he struggles with success, depression, insanity, and a lingering obsession to list – you know, the usual: favorite colors, fine bottles of wine, past loves. The short cost about $300 to make, and Dixon admits, “It's funny but 'Schindler's Lists' is the most profitable thing I've done. The prize was $1000, which I divided up with the production team, and a new Dell workstation, which I gave to my parents.” Originally Dixon wrote a script for another idea, "Rosemary’s Teenager," but in the end he decided it would be too expensive to make.
Dixon is opting out of this year’s contest, but Mascot Wedding, the group behind last year’s Audience Favorite, "Memen2," submitted this year a short called "Over the Top 2: Armageddon." It features Lincoln Hawk (Mac Blake) as he proves his worth as a parent through arm wrestling… again. According to Director Dave Youmans, “We wanted to do a Stallone film for a while, but every other one has a sequel. Plus it’s such a rich text. It’s a comment on the time – that they actually made a movie about an arm-wrestling competition and had it be the lynch pin in custody battle.” Youmans says that if the team does this competition again, then they hope to brave either "Glory2: 2 Fast 2 Glorious" or "Tricentennial Man."
Alamo has been screening all of this year’s submissions for the past week. Finalists for Sunday’s awards screening will be chosen through online voting. Come Sunday, “a team of local Austin cinephiles” will select first, second, and third places, and attendees will again select an Audience Favorite. Go here to vote online for your favorite film. To find out more about Sunday's Unneccessary Sequels Award Show at the Alamo Ritz, go here.
Last year's winner embedded below. 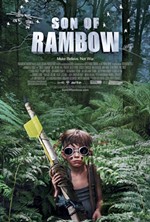