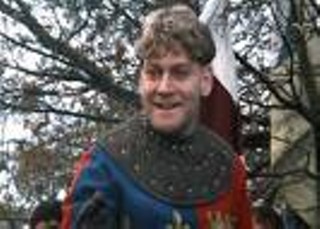 Heavy is the head

First of all, Miss Jones, if you take away my knee-jerk naysaying, you’ll take away the very thing that makes me me. Rash judgments are my bread and butter, my stock in trade, my bailiwick, my sine qua non. They’re what got me through college and the Peace Corps and the seminary and Vietnam. They’re as Josh Rosenblatt as chocolate cake, as cigarettes, as long walks off short piers. Take away my rash judgments and you might as well do Film Fight with the movie critic for Family Circle Magazine. Or The Austin American-Statesman.

Second of all, much to my shock and dismay, I agree with all your assessments about Orson Welles, Ian McKellen, and Maureen O’Hara. Technicolor was just made for her, wasn’t it? Have you seen How Green Was My Valley, by the way? Man, is that an entertaining movie about Welsh poverty and collapsing mine shafts.

I just have to take issue with two points you made:

One, I don’t have a problem with Ethan Hawke in general, just Ethan Hawke as Hamlet. And as a novelist, I guess. And as a director, I have a small problem with him. Oh, and as a pop philosopher in Richard Linklater movies. And maybe as a painter in Charles Dickens adaptations; I don’t remember. Other than that, I think he’s great.

And secondly, if you had bothered to watch any of John Wayne’s underrated 20th Century Fox silent B-movie pirate classics, like Daredevilry on the High Seas, Hard to Starboard!, The Big Storm, The Big Storm II: Change of Socks, or Jub Jub the Chimpanzee vs. the Barbary Pirates, you’d know that he spent the better part of his early career soaking wet. In fact he was the first and last actor to have a “constant dampness” clause in his studio contract, leading director Raoul Walsh to comment on the set of The Big Trail, “John Wayne is the soggiest actor I’ve seen since ‘Fatty’ Arbuckle.”

(Just a little touch of absurdity in the night.)

I’d like to address one more issue before we close the book on this whole actors discussion we’ve got going here. Let’s call it the Laurence Olivier/Kenneth Branagh conundrum. To discuss Shakespeare movies is to a large degree to discuss these two guys. Because you can argue that McKellen’s a better actor and Welles is a better director and Kurosawa’s a better interpreter, but the fact of the matter is, it was Olivier who really made Shakespeare movies commercially and artistically viable, and it was Branagh who kicked off the Shakespeare-in-film revival we’ve been swimming in for the past 20 years. So, culturally speaking, it doesn’t get any bigger than these guys.

It comes down to this: Branagh can shout and seethe, but Olivier can brood. Pick your poison. Olivier’s “To be or not to be” speech beats Branagh’s, but Branagh’s “St. Crispin’s Day” speech is far more rousing that Olivier’s. Well, wait, that might not be entirely true, now that I think about it. As much as I love Branagh’s Henry speech, as much as I enjoy hearing those violins swell, as much as I feel my coward’s heart start to pound every time he gets to the bit about the “band of brothers” and find myself wondering (like a sucker) about the manly and honorable joys of warfare, I remember that Branagh’s version may have moved viewers to revisit Shakespeare, but Olivier’s inspired them to kill Nazis. So now that I think about it, there’s just no comparison there. As important as it is to keep creativity and history separate and to distinguish between the artist and the art (if we avoided every artist or composer of writer who ever held racist views, for example, our walls, CD players, and bookshelves would be unnervingly bare), any work of art that actually convinces people to pick up guns and fight Fascism has got to have some inherent value above and beyond mere aesthetic predilection. If you told me right now that it was Mickey Rooney’s performance in Boys Town that motivated Americans to go fight Franco in the Spanish Civil War, I would have to stand up and cheer Mickey Rooney right where I am. (Thank God that shit isn’t true because I cannot stand Mickey Rooney.)

So, pick Branagh with his shouting, mud-caked, spittle-covered emoting, or take Olivier’s clean, distant, Technicolor introversion instead. Take them both for all I care. You can have ‘em. I’m done watching Shakespeare forever. May the Earth spin a thousand times around the sun before I even hear the man’s name again.

I’m now off to watch A Night at the Opera.

Not to be disturbed till x-mas.