Ophelia may go to a watery grave, but it's great prep work for an ingenue 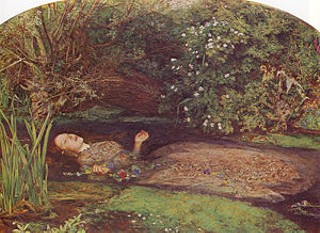 “Why is Shakespeare so popular with filmmakers when he contains so few car chases and explosions? Because he is the measuring stick by which actors and directors test themselves.” – Roger Ebert

Despite being second only to Juliet in terms of tragic female figures – well, of the non-murderous variety – Ophelia’s kind of a thankless part. She gets lectured and hectored, used and abused, by father, brother, lover, and king, and in the end, she ends herself in an everlasting dunk. Miserable creature, that – yet every ingénue wants to play her onscreen. It’s great prep work, really – just look what a half-dozen screen Ophelias have spun from their time with the Bard.

Jean Simmons (Olivier, 1948): If a woman’s love be brief, than Ophelia’s part is even more negligible; she’s an important plot device, sure, but really, this is a boy’s club through and through. A good dress rehearsal, then, for Simmons’ later work: She’s the only one who couldn’t plausibly stand up and shout, “I am Spartacus!”

Helena Bonham Carter (Zefferelli, 1990): Ophelia knows what it’s like to watch a loved one go off his rocker – something Bonham Carter could tap into six years later in Fight Club. Hamlet also offered her the chance to work on that old chestnut: the onscreen croak. Bonham Carter would go on to more inglorious deaths in Mary Shelley’s Frankenstein, Henry VIII, Sweeney Todd, and – sorry, kids, spoiler alert! – the forthcoming Harry Potter and the Deathly Hollows Part I. Or probably Part II.

Kate Winslet (Branagh, 1996): In addition to Branagh’s hideous attempt at kinky – by way of cutaway shots to Hamlet and Ophelia getting sweaty in the sheets – Winslet’s extended scene in a straightjacket probably came in handy the next year when wearing corset and bustle for James Cameron’s Titanic. That time, at least, she avoided a watery grave.

Julia Stiles (Almerayda, 2000): Well, she’s set to play Sylvia Plath, the most famous of all suicides, but I suspect the greater influence of Ophelia on the actress was on her seminal work in 2004’s The Prince and Me, in which she fell in love with another Danish prince, but ditched the royal we for med school instead. Take that, Hamlet.

Nala in The Lion King (1994): Unlike the other screen Ophelias, Nala lived to see another day… hence her headlining in the Christian Coalition-bankrolled Lion King 2: Hey, Kids, Here’s How the Circle of Life Really Happens (So Long as You’re Two Consenting Adults and it’s not Recreation, it’s Procreation).