The West Side of Shakespeare

Why West Side Story wins 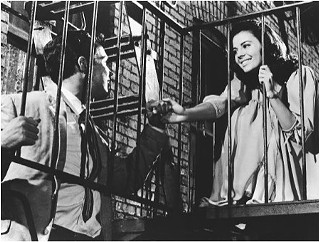 As Josh mentioned in his 4am dispatch, we previously agreed that today's fight would come down to Shakespeare adaptations which use the Bard's language versus pictures that are "merely" inspired or suggested by him. Josh is pro original-language, and I'm ... against it? Sheesh. I guess I never meant to say non-Shakespearean language is better per se -- only that they're just as worthy adaptations as the classical ones -- but you know what? Fine. I'll go with it. You know why?

Because I have West Side Story on my side, and you don't.

Now normally I'm no big fan of musicals, nor am I a big fan of films with white people pancaked to look Puerto Rican, or overdubbed with 60's go-to gal Marni Nixon... but come on, it's Natalie Wood. It's hard to begrudge Natalie Wood.

And why would you want to, when singing voice or no, proper pigmentation or no, she's such an integral part of this marvelous adaptation of Romeo and Juliet, one that combined the titanic talents of Leonard Bernstein (music), Stephen Sondheim (lyrics), and Jerome Robbins (co-direction/choreography/original idea)?

To quote from perhaps the musical's signature song – which itself has been re-invented again and again by the likes of Dave Brubeck, Tom Waits, the Supremes, and Sun Kil Moon – West Side Story takes the framework of the original Shakespeare text and finds "new ways of living" – new ways of making Shakespeare's ancient grudge relevant – but still poetic – to modern times.

It's 1961, and the Capulets and Montagues have been supplanted by the Sharks and the Jets; their ancient grudge now comes down to working-poor rage and each community's rallying cry of anti-immigration / anti-assimilation. Kinda kicks Romeo and Juliet's puppy love up a notch, eh?

Take for instance, the zippy delights of "Gee, Officer Krupke." Sounds like a fun little ditty, till you really listen to the words -- in which these abandoned kids turned street gang mock all the ways they've been misdiagnosed – by social workers, psychiatrists, cops, their crummy parents – and end the piece with an angry kiss-off to Krupke: "Krup you!"

Go on. Watch it. It's terrific.