Speak Low If You Speak Love 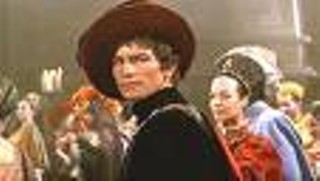 Okay, Kim, as much as I hate to admit that you made a good point, I have to admit you made a good point. The gaudy materialism and ostentation of Luhrmann’s visual aesthetic does go a long way to communicating the moral vacancy in the lives of rich kids who are overindulged by their absent parents as a way of making up for their own waywardness and self-indulgence. Fair enough. (And screw you.)

But then: It’s all well and good to use Shakespeare to make a point about societal dysfunction and adolescent immorality and to indulge in all sorts of hyperkinetic camera trickery and audio manipulation when you’re shooting a bunch of tattooed gang-boys shooting up neighborhoods and showing off their belt buckles. But what do you do when it comes time to shoot a scene that’s predicated on the more inward-facing, considered human emotions, the emotions that don’t change regardless of the prevailing cultural winds or the particular aesthetic whims of the day, emotions like love and despair? Do you, as a directorial practitioner of the antic arts, try to temper some of your more outlandish tendencies in service of the story and its characters, or do you just throw consideration to the wind, make no distinction between different emotional states in a screenplay, and crank everything up to the same frenetic pitch in the hopes that audiences will be swept away by the sheer overwhelming physicality of the experience?

I think Luhrmann backed himself into a corner with his decision to shoot Romeo + Juliet as a kind of music video/kung fu hybrid, because it left him in a position where the energy level had to be so high at all times that nothing approximating subtlety or ambiguity could sustain. Even the lovers' courtship scene in the pool is plagued by manic editing, and even Mercutio’s death is cause for booming aural special effects and eye-popping technical wizardry. Dead friend? Shout at the heavens and the heavens will respond with a mighty digital roar and great flashes of light. True love? We’ll make sure the camera keeps moving so we capture that love from as many angles as possible.

Zeffirelli, on the other hand, is content to let his actors and Shakespeare’s words do the talking for him. Those actorly actors may plague our ears with their plumy enunciations, but they also have the time and the quiet and the space to allow real emotion (not merely shout-from-the-mountainside, Greek tragedy-style emoting) to fuel the action of the film. Shakespeare’s poetry is allowed to unfurl and wrap around its speakers’ tongues and its listeners’ ears as it was meant to, rather than just serve as an instigator of action or as a collection of marketable quotes to be reprinted on T-shirts and posters.

Take the Italian’s morning-after scene, in which Leonard Whiting’s eyes wander over Olivia Hussey’s curves as she coaxes him back to bed with poetry and promises. Because the camera lingers on his eyes while she speaks, it’s able to capture the battle between lust and the survival instinct (a battle everyone should experience at least once in there lives) that’s at the heart of Romeo’s dilemma and most likely at the heart of all of recorded human history, from the siege of Ilium to the fall of John Edwards. Plus, that lingering gives Shakespeare’s words the time to hang in the air - “It was the nightingale, and not the lark, that pierced the fearful hollow of thine own ear.” – and sink into our ears. There are worse things, no?

As for the death of Mercutio? Instead of being a brief and unconsidered explosion of manic energy played for shock value, Zeffirelli’s death scene is long and complex, capturing all the hatred and begrudging respect Mercutio and Tybalt have for each other, all the emotional distance a clown feels from those who claim to love him but whom he merely entertains, and all the dissatisfaction and emptiness one feels upon receiving all one has ever wanted; in the case of Tybalt, Mercutio’s untimely end.

So, say what you will about Mr. Luhrmann; actorly, plumy Michael York has it all over John Leguizamo.