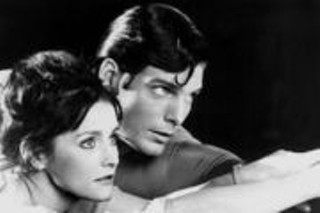 How about a little screwball with your night flight?

"I know you said that the X-Men movies constitute 'art,' but would you really put them in the ring with All the Real Girls or Rushmore or – God help us! – The Philadelphia Story?"

Well, you just named three of my all-time favorite movies (way to exploit my weaknesses!). Have I met a comic-book movie yet that upends me as utterly as any one of those films? No. But neither has 99.9% of every other movie of every other genre I've ever seen.

That said, those three movies are apples and oranges in my mind. They each appeal to me in very different ways. But do I think comic book movies ably mine elements from other genres – the weighty drama, screwball comedy, desperate love triangle, Greek tragedy, etc.? Hell yeah. (Spoilers ahead...)

I just re-watched the original Superman for the first time since I was a kid. (Sidenote: I was never a huge fan, so it was something of a shock when the opening theme music kicked in, and I had an immediate, visceral, tear-welling reaction. But I guess the nostalgia thread is for another post.) Do you remember the rooftop scene between Lois Lane and Superman? The teasing banter, the crackerjack-timing – that's screwball, baby.

And what about in X Men 2, when Wolverine and Cyclops watch the woman they both love sacrifice herself for the greater good (more on that later), and then the two men clutch each other – their one-time rival – in mutual despair? Tell me that's not the stuff of tragedy – and highly effective stuff, too.

While we're more or less on the subject, let's talk about comic-book love.

I think you know I’m a big sucker for the love stuff. A good love story requires conflict, something that keeps the intended lovers apart. Anybody who’s keeping tabs on the current state of the romantic comedy knows that, in the absence of the old standbys (codified gender roles, class and race divisions), more and more ludicrous ways have to be cooked up to keep Boy and Girl apart till the third act.

But comic book movies have tragic, ever-thwarted love built-in to the system.

How hot is that?