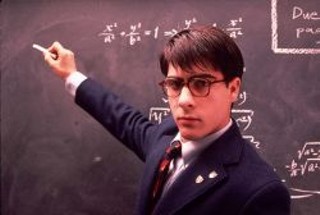 Max Fischer: a true hero for our time

Now we’re getting somewhere. Pleasantries dispensed with, Queensbury Rules tossed out the window, gloves off.

In fact, the very point I’m trying to make is that I don’t like comic-book movies because they’re so damn comic book-y – cartoonish, fantastical, over-the-top, free of the demands of internal consistency and, most importantly, suspense - which is the exact reason you like them. As you say, “There’s a visceral thrill to watching things go boom, and comic book movies allow us to indulge that desire while placing the action in an alternate universe … And no matter what, THEY ARE GOING TO SAVE THE DAY.”

Call me a hater of all things fun (you wouldn’t be the first), but I get much more of a visceral thrill out of watching movies based in reality, where actions have consequences, and it’s not simply taken for granted that the guy we’re rooting for is going to come through in the end, victorious and relatively unscathed. What, actually, could be less thrilling than knowing that, no matter what happens, your hero won’t be dying anytime soon? It’s like rooting for the sun to rise or betting on April to follow March. It seems to me all drama is built on suspense. Take that away, and replace it with simple special effects wizardy and a top-notch demolitions crew, and you don’t have a movie so much as an amusement-park ride … or a monster-truck rally.

(One quick point you made early yesterday bears repeating here, I think. These opinions of mine are based entirely on comic-book movies, not comic books, which I don’t read. For all I know, superheroes in comic books die all the time. In fact, I seem to have a vague recollection of Robin giving up the ghost at some point. But super-hero movies, which are worth hundreds of millions of dollars in ticket sales and T-shirts sales and spin-offs and Happy Meal tie-ins? Those heroes are heroes for life. No drama necessary.) So every time you have one of these movies come out with their slow-motion, gravity-defying car chases; their magically bending bullets (I’m looking at you, Wanted); and their tight-clad heroes and heroines impervious to bullets, bricks, or bats, my first question is always, “What’s the point? This franchise is too lucrative for the studio heads to allow our hero to die … or – god forbid – do something morally questionable.”

Which is why I was so disappointed with the second half of Batman Begins. I don’t make movies, so I don’t know what would constitute a good super-hero movie; all I know is that for 45 minutes I was right there with Bruce Wayne, tormented vigilante, even with all the improbabilities of his story: a man fighting crime in a full-body bat suit; no one in Gotham City putting two and two together and coming up with the fact that the sudden appearance of Batman coincided perfectly with the equally sudden resurrection from the dead of angry, vengeful, orphaned, super-ripped, military-supply-corporation-owning billionaire Bruce Wayne; an unstoppable army of assassins who have been the defenders of justice since time immemorial; Tom Wilkinson playing an Italian-American.

And then, Boom!: Batman the Marketable vs. the forces of evil.

And all my dreams were shattered.

So I ask you, Kim: As a movie lover (and, as I know, a lover of some truly great movies at that), why wouldn’t you demand more from your super-hero movies than pure visceral thrills and guilt-free destruction-appreciation? Why can’t they be that and more? What's wrong with holding everything up to high standards? I know you said that the X-Men movies constitute “art,” but would you really put them in the ring with All the Real Girls or Rushmore or – God help us! - The Philadelphia Story?