Grimly and the Ghouls

Artist Gris Grimly has some blood-splattered lessons for debut filmmakers.

Sometimes it can take some time after a film festival to wade through everything picked up at the vendor tables. But Cannibal Flesh Riot!, the debut mini-feature by director-writer Gris Grimly has turned out to be one of more wonderfully gruesome acquisitions from last month's Fangoria Weekend of Horrors. A tribute to 50's drive-in horror, Ray Harryhausen and psycho-billy music, it's the black-and-white tale of two redneck flesh-eating ghouls and their unfortunate final visit to the graveyard.

The movie, best described as Tex Avery's Evil Dead, is an object lesson for filmmaking hopefuls in turning $6,000 into a fun little calling card. Mixing hyped-up live action, stop-motion, green screen, and a dash of CGI, it proves how available technology has become for film-makers.

Grimly (who counts Neil Gaiman as a fan and collaborator) is best known for his artwork for some of the more delightfully gothic kids books, like vampire romance Boris and Bella, and his own Wicked Nursery Rhymes. "I’m not necessarily a children’s book illustrator," he explained, "as much as I like monsters and horror.”

The straight-to-DVD release is ridiculously loaded, with two commentaries, trailers, a making-of featurette that holds the real secret for effective discount filmmaking (hint: have lots of like-minded friends who will work for food), and a bonus CD, all for $20.

While it maintains his sense of childishly blood-splattered glee, Grimly agrees it's not just a jump in medium, “but I think also a jump with my audience. There’s nothing very horrible, it’s done very cartoonish, even though it’s live action: the characters, a better word is like comics. And they definitely have filthy mouths, which sets that movie for an older audience."

What Will Robert Do Next?
Robert Rodriguez talks about his next movie, DVDs, and his next possible collaborator. 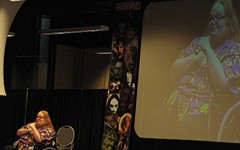