Ding dong: The Golden Globes are (more or less) dead.

Ding dong: The Golden Globes are (more or less) dead. In the wake of a celebrity walk-out (stars like George Clooney pledged not to cross the writers' picket lines), NBC announced today it was killing Sunday's broadcast, choosing to air instead a brief news conference. The Envelope, the L.A. Times's arm devoted to award-season speculation, said this: "The scrapped program would be the first awards show to fall victim to the Writers Guild of America strike, and February's Academy Awards also could be in jeopardy."

Which makes me wonder: Will the insane web machine of awards-show prognostication also fall victim? Site after site, from the Envelope to bloggers like The New York Times' Carpetbagger David Carr and Hollywood Elsewhere's Jeffrey Wells have been running numbers for months now, waxing incessantly over opening-day receipts, brand-name recognition, and Academy demographics. But if the awards shows are reduced to, well, the awards, and nothing else – stripped of their glitz and public profile – maybe we'll all lose interest in them as sporting events.

Doubtful, but consider this: Mass audiences may just tune in to the Independent Spirit Awards, the only WGA-approved show out there. Imagine: a world where the watercooler talk made for hot debate over which newbie deserves the John Cassavetes Award. (The home state vote goes to Chris Eska for August Evening). The Spirit Awards air on IFC on Saturday, Feb. 23. 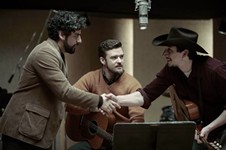 Golden Globe Award Nominations: Best Original Song
Five nominees might get you off Netflix and into theatres