Digital Drag Review: Boiz of Austin’s “Are the Straights Okay?”

The Boiz revel in heteronormative absurdity

Before the Boiz of Austin’s digital drag show “Are the Straights Okay?” even kicked off on Tuesday (Jan. 12), I already felt at home during the drag king troupe’s preshow.

As the audience logged on to Tuesday night’s Twitch stream, chat conversations bounced between life updates and comments on whatever song was playing from Boiz performer Papi Churro’s curated playlist (which, apropos for the show's theme, featured only “white and straight” tunes, as deemed by Papi). Although virtual, the on-screen atmosphere re-created the familiar sensation of milling around a bar before a show, picking out whichever pilsner beer on the can menu, and eavesdropping on strangers’ conversations – the kind of pleasant anticipation I hadn’t felt since the last time I went to a live performance in March before pandemic shutdowns.

When the playlist ended, Itzel Abrego (Churro, out of drag) read a Native land acknowledgment in a prerecorded video before the livestream turned to our evening’s host, the Great Tex, who greeted the audience donning a snapback with a mysterious can glued to the brim. (I debated with myself whether the can was 1) shaving cream, or 2) Axe body spray – a mystery that was solved later in the show when Tex sprayed their pits for a gag.) Against a cyberpunk/vaporwave backdrop, Tex walked the audience through the night’s format: Front-loaded in the show were six prerecorded performances, with each one reflecting and dissecting a different aspect of straight culture.

To say the performances were all unique would be an understatement – each of them was totally distinctive in their take on what is, in fact, problematic with heteronormative culture.

The night’s first performance by Papi and Mad Max Morrison focused on the “straight” culture of wrestling. Straightness and wrestling aren’t completely synonymous, of course, as evident in the Twitch chat’s explosion with excited comments about the audience’s favorite queer wrestlers. With Mad Max lip-syncing to “Take My Breath Away” while Papi tied their hands and feet, the duo’s performance was exactly how I like my wrestling – rough n’ tumble and yet utterly tender. The two paired up again for the last prerecorded performance of the night, a sendup of whiny, Soundcloud-rapping straightness to the tune of the SNL parody song “Yeet Skirt.” Watching Papi shake a sparkling “HoHoHo” necklace against a video backdrop of scene kids scream-rapping was, well, amazing. 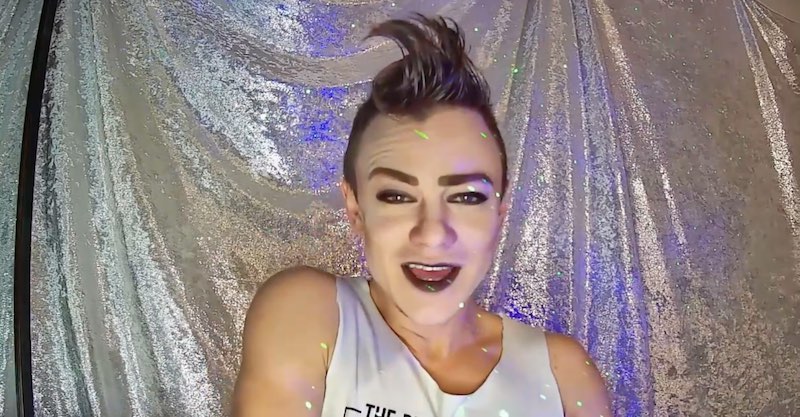 Alexander the Great performs during the Boiz of Austin's "Are the Straights Okay?" (Image via Twitch)

Another smash hit was Mx. Feelings’ act, which brought the hetero vibes through the roof. Performing as one of the most classic straight couples in cinematic history – The Rocky Horror Picture Show’s Brad Majors and Janet Weiss – Mx. Feelings tore it up as both Brad and Janet belting out “Damn It, Janet.” Details such as its filming location outside a church, Mx. Feelings’ high-camp choreography, and a Ring Pop wedding ring fleshed out the act with extra visual layers.

One of the night’s stand-out highlights was Stellar Manx and Theory of N’s performance of the no-homo-yet-still-homo anthem “If We Were Gay” by musical comedy duo Ninja Sex Party. Did I expect to see someone perform drag as Danny Sexbang and Ninja Brian on this Tuesday eve? No, but boy howdy did I respect and enjoy the hell out of it. (Also: special shoutout to the video’s little details like the Kougra Neopets plush in the background.)

Dropping in with a killer lip-sync to Dorian Electra’s “Guyliner” was Alexander the Great. Everything in the performance was high glam, high sparkle, and reminded me of every pretty-boy, indie-emo boy of the 2000s – which was a sentiment shared by the audience, who erupted with Pete Wentz mentions in the Twitch chat. Leaving off with a message that “makeup and tears are for every gender,” Alexander’s act totally floored me.

Meanwhile, Tex filled in the slots between acts with sprinklings of straight culture filler – a “Live, Laugh, Love” sign and an acoustic cover of Nickelback – leading up to the evening’s finale: a round of live drag roulette. Watching Tex and Papi laugh (and sort of suffer) through singing random songs off the preshow’s “white and straight” playlist was the perfect cozy send-off to the evening. Even though the show was virtual, the energy was that of a late-night farewell after an intimate and interesting live queer performance – hours afterward I was still smiling, thinking about what amazing talents lie in this qmmunity.

The Boiz of Austin’s next digital show, “BoizDSM,” is on Tue., Feb. 9, streaming on Twitch at twitch.tv/papijinxy ($5 suggested donation, and don’t forget to tip your performers, too). Catch a recording of “Are the Straights Okay?” on YouTube here.