”Although the air is thick in the world, there’s a 14-year-old in me whose dreams are coming true,” emails Duke. “So I have to honor that first.” 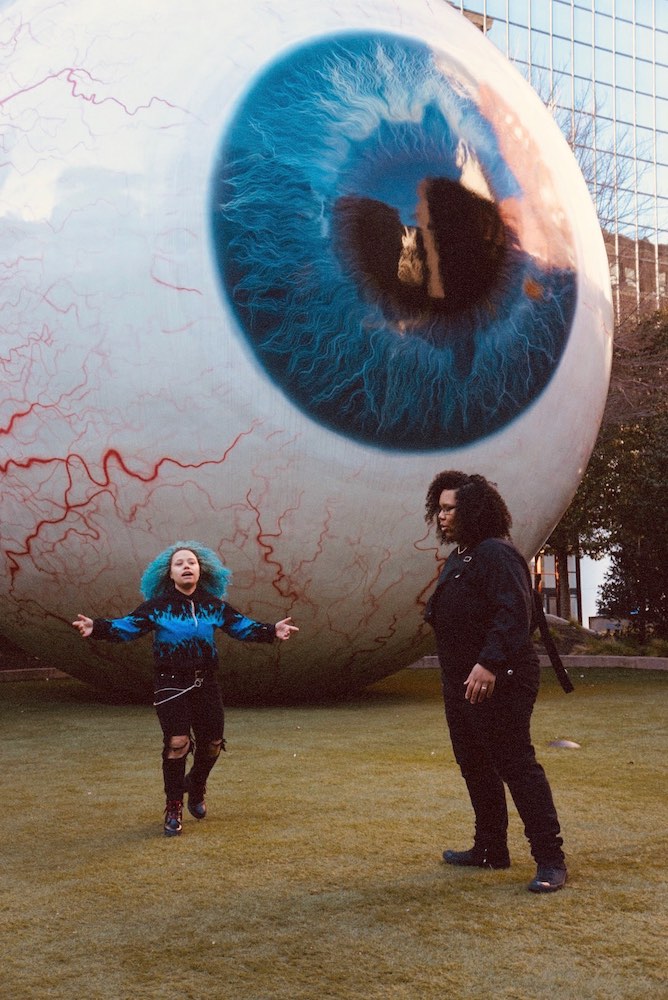 AC: What are the backstories behind "Mad," both the song and the music video?

MD: “Mad” is actually the last song I wrote for the album. I honestly was done with it. My producer – Cody Kimb, who produced the whole album – sent me the “Mad” beat when he was on tour with his band and nonchalantly added in his text: “Made this beat on a plane while thinking of you!” How beautiful is that? … As far as the music video goes, as flashy as it is, it was important for me to put the process of making the song throughout it. To let the kids know it’s real! To let people know that it’s been a journey. One huge-ass journey.

AC: Your wife Keeley, who's in the music video, is a huge part of your work: your DJ; collaborator; and inspiration. What is that process like, working and making music with your partner? Keeley, I'd like to hear your thoughts on this as well.

MD: I think it’s the most beautiful shit in the world to have my wife of eight years right next to me, watching our dreams come true. … She just went from hyping me up and singing every song from the front row, to doing it onstage with me. Imagine having your best friend with you every time you did that thing it is that you love. It’s euphoric.

Keeley: I moved to America three years ago to be with Mama Duke and the journey is beautiful, both being creatives. … She will put on a beat and do her thing, then come to me a few times to confirm that the song’s a banger. … I’d let her know if it weren’t hitting like it should. We run everything by each other, being honest and letting each other know where we could improve.

“At the end of the day my ancestors gave me a sharp tongue and a power to take up space. I dropped my music video on Juneteenth to forever remember that I can say and do whatever the fuck I want, whenever I fucking want.” – Mama Duke

AC: On Instagram, you wrote, "I think today [Juneteenth] was an important day to drop my first ever music video because I come from a history of powerful women that gave me this voice that I use unapologetically. I wouldn't trade this 'Triple Whammy' for anything. Black, mix-raced, queer females. We here! We always been here." Can you expand on that?

MD: As a queer, Black, and Latina female, Juneteenth meant more than it ever has this year. While some of the world mourned that we still aren’t free and never have been free, and the other half celebrated in comfort of there being major conversations and accomplishments happening, I found myself somewhere in the middle. Nonetheless I was liberated. Liberated knowing my ancestors gave me the gift of living in a time to experience seeing the good and the bad. At the end of the day my ancestors gave me a sharp tongue and a power to take up space. I dropped my music video on Juneteenth to forever remember that I can say and do whatever the fuck I want, whenever I fucking want. My ancestors died for the confidence I have. I’d be a fool not to use it.

AC: How has your experience been in Austin as a queer, Black, mixed-race woman in the music scene?

MD: If you asked me that on two different days, I’d probably give you two different answers. Today? While I naturally don’t have the same opportunities as someone who isn’t a queer, Black female, I think I’ve been one of the lucky ones to a certain extent. Sure, I could have more opportunities. Sure, I could have my phone ringing more often, but I’ve always had my glass half full.

I don’t know, that’s a good question. It was obviously harder at the beginning of my career, but I wouldn’t change the pushback for anything. I guess we’ll save this question for another article cause you can imagine what a rollercoaster ride it’s been.

AC: How can white Austinites better support the city's Black musicians and artists? Where do you see that change needing to happen first?

MD: Easy. Book more Black acts. Venues often stay away from “the Black crowd” cause we’re rambunctious as fuck. The word “rambunctious” has such a negative connotation, but I don’t see it that way. We’re loud; we're intimidating; and we take up space. These are all facts. We also know how to pack a room and bring our people out. We also know how to conduct business as well ourselves. We also bring money with us. I think venues have no choice now but to start throwing more Black shows. They need us now. We already know we can survive without them.

Editor’s note: This interview has been edited for clarity and brevity.