A phrase I’ve been thinking about a lot in my chats and explorations into queer content post-social distancing is “Necessity is the mother of invention.” But with Thee Gay Agenda’s lineup of virtual events, dubbed the Stay at Homo series, that phrase might need to be adjusted.

Maybe instead, for these queer Austin stalwarts of diverse, exciting entertainment, we should say: “The need for queer connection is the Daddy of reinvention.” TGA seeks to create joy not in ways that copy-paste the elbow-rubbing of physical parties, but reinvent what queer connection can be in the virtual screenscape. 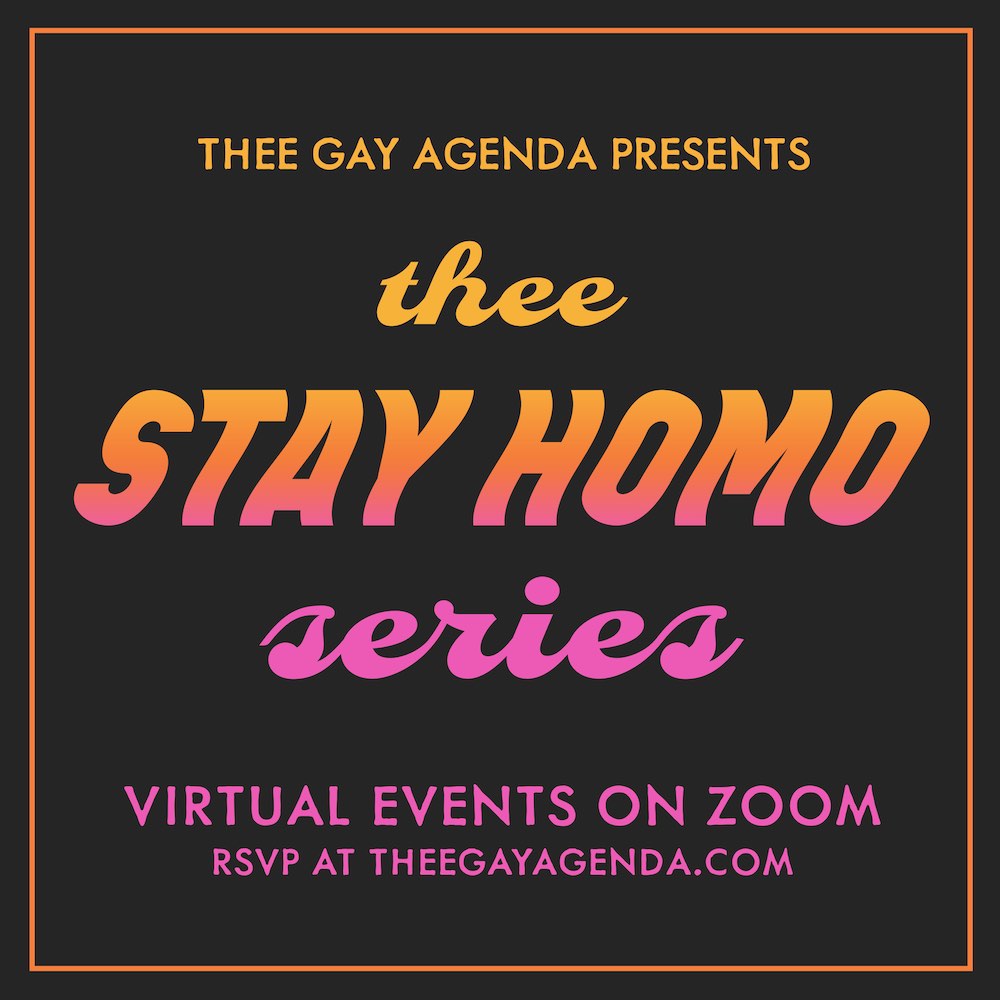 The LGBTQIA drive to be around other babes and beauties is a strong one, usually craving the thrill of face-to-face fraternization. So when our ability to go out was limited by stay-at-home orders, finding new ways to connect became the necessity – while still keeping each other safe and healthy. For example, TGA’s Thee Lonely Gays Social (Sun., April 26, 7pm) didn’t start out as an online event at all. Originally planned as an in-person meetup to satisfy the age-old problem of finding friends, flings, and sig-Os within the queer sphere, the coronavirus situation called for a new angle on the event – one that actually gave it a wider pool of QTs to meet.

Instead of being a local meetup with only Austin elgeebeateaqueues, TGA is presenting Thee Lonely Gays Social with Greetings From Queer Mountain New Orleans, allowing for some of what TGA founder Emmet Hunker calls cross-city pollination. Appearances from Austin act Jade Fusco and New Orleans’ Lash Wednesday will highlight a virtual confab that creates space for cooped-up queers to flirt, vent, and speak their minds to other lonelies both near and far away. That space is important with the treacherous terrain of the world right now, Hunker says via email, but “the good news for us queers is that making shitty things less shitty is what we do best.”

Thee Lonely Gays Social isn’t the only offering TGA has on their, well, agenda. At the crossroads of free time and jelly-bones schedules was an opportunity to bring many planned IRL experiences to the virtual zone. Thee Learning Factory, a now-online weekly workshop series previously meant to tie into TGA’s monthly live shows, works both as a way to bring new skills to the community as well as a platform for different queer creators and businesses. Workshops – which have already started but several of which run until mid-May – include “Chairography” on Wednesday nights with pole dancing gymnast Zoja Ulesoo instructing on how to work a chair into a sensual routine, and many more.

There’s also Thee Gab, an artist talk series with queer creatives speaking on all manner of subjects from community to process, including an April 30 chat between Kristie Denlinger and Megh Sullivan on queerness & comedy.

“We have a beautiful, expansive network of talented queers who want to share their juicy brains with more humans.” Because of this, Hunker says, TGA’s online programming has fallen into place organically. “It's been fulfilling to see how our organization has been able to transition in a fruitful way to the virtual realm.”