OUTsider Fest’s opening night showcased one of the baddest apples of the bunch, gutter-qween provocateur Christeene, who returned to her former ATX home alongside her New York City hype man and DJ, Bed Tundee, and backup dancers, T Gravel and Dawg Elf.

Walking into the Vortex’s intimate, packed tent on Wednesday’s rainy night, a festgoer was heard confiding to a friend, “I go to see Christeene because she scares the shit out of me.” 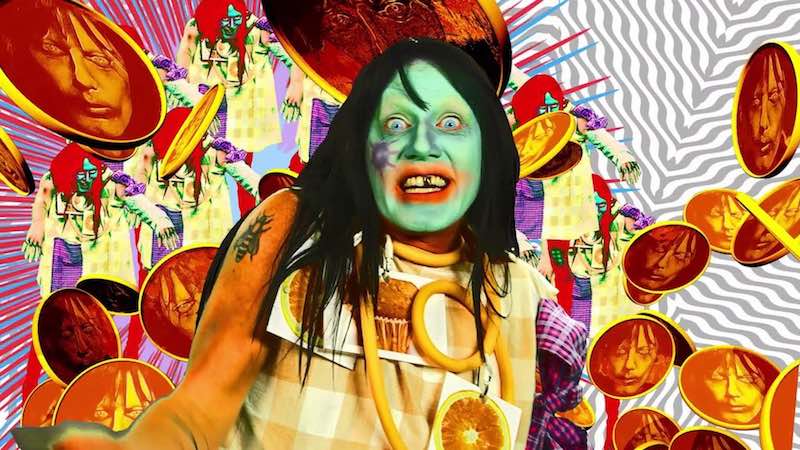 Though we’re pretty sure Christeene didn’t scare the shit out of anybody (no promises though!), the show was full of her quintessential, Christeene-esque antics. With her smeared makeup and trash aesthetic, she lived up to her festival program bio as a “perversion of punk fully equipped with an arsenal of ferocious music intertwined with raw moments of strained intimacy and fiery stank.”

Early in the show came the arsenal, but it wasn’t just with the music. Within minutes of gracing the stage, as she stripped off her first layer of clothing, Christeene stuck a butt plug tied to a bouquet of balloons – where butt plugs are meant to, uh, be stuck – before yanking it out and throwing it into the crowd to float from person to person for the rest of the show ... well, almost the rest of the show.

The audience was high energy early on, and though her balloon trick isn’t new for Christeene, seeing it in person shifted the room’s mood: Christeene created an intimate show both through conversing with the crowd and physically breaking the fourth wall, even if it just was to finish people’s drinks (including your reviewer’s).

Christeene’s setlist brought some crowd favorites in her tell-tale nasally riff, like “Fix My Dick,” “Tears From My Pussy,” and “African Mayonnaise,” but she also used her stage time to celebrate OUTsider and the people who attend it.

She talked about supporting “each other’s strange habits, natures, looks, feeling, and sexualities.” Most of all, she added, OUTsider “helps us understand that not one of us is better than the other or on top of the other … unless sexually.” Oh, and that we’re all equal because we have a b-hole.

Speaking of b-holes: To the boy who took the butt plug off the balloons mid show, we see you.