Austin's queen of camp uses her humorous platform for good 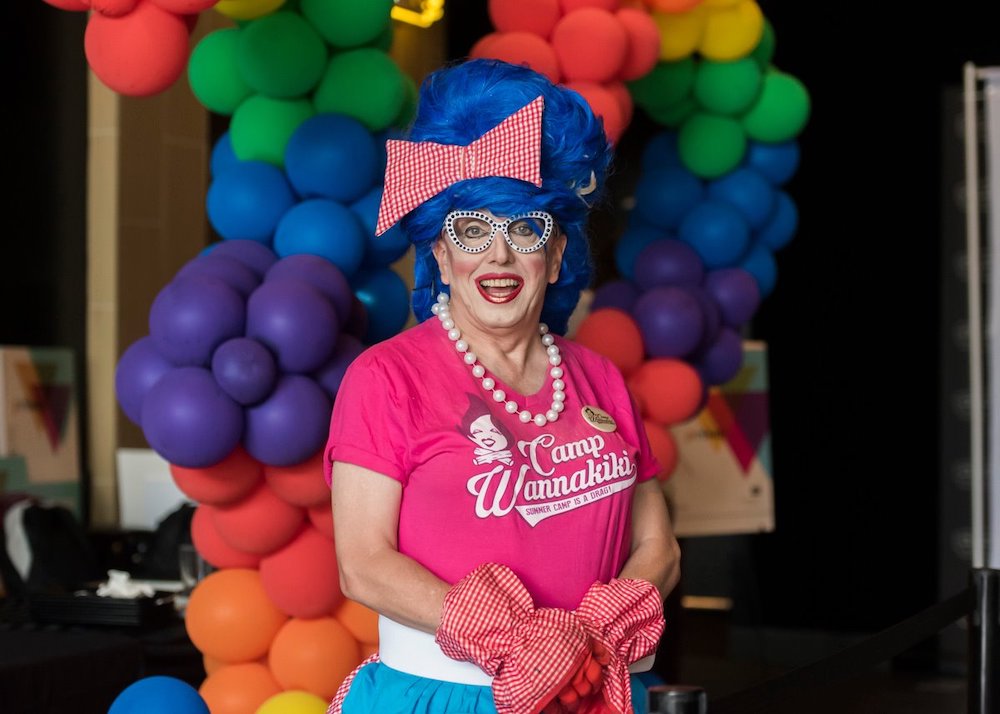 Flashback to the late Eighties: George Michael just taught everyone all about Faith, Patrick Swayze was having the time of his life, America was at the height of the AIDS epidemic, and some self-identified leather men were dancing around a Texas campfire in pink tutus and wigs singing “Diamonds are a Girl’s Best Friend.”

What was meant to be a one-time joke to get a few laughs, turned into a lifelong, thirty-year career that’s always had one thing at its center – helping people. Shortly after her first campfire performance, Miss Kitty Litter dedicated her drag efforts to donate almost everything she made to LGBTQIA charities in an effort to help fight the AIDS crisis.

That “something good” happened last summer when Miss Kitty Litter graced the drag queen reality TV stage as a contestant in Camp Wannakiki’s second season (a 2019 theme for Austin’s drag community with Louisianna Purchase joining Dragula season three). At Camp Wannakiki though, the premise is quite simple: Take a bunch of drag performers and see who can last the week at an actual summer camp. (Spoiler alert: She doesn’t win, but damn boy does she get close!)

“The show gave me a new appreciation for younger queens,” explains Miss Kitty. She taught them what it was like to live through the AIDS crisis – how it shaped her drag in her efforts to raise both money and awareness and how drag (and HIV) can still influence the community, as a whole. The younger queens also taught Miss Kitty a trick or two like what Instagram is and the importance of branding yourself in this day in drag. (Shameless plug: Go follow one of Instagram’s newest users: @miss_kitty_litter_atx.)

Even though she didn’t take home the crown, Miss Kitty stole the hearts of many Wannakikers and made her Austin community – whose hearts she already possessed – proud. Plus, she set the record for the oldest drag performer to compete on any drag reality show (yasss, senior queens!). But like many stardoms, with the lovers come the haters.

And the haters came in the form of a They-Who-Should-Not-Be-Named Houston-based anti-LGBTQ hate group (as declared by the Southern Poverty Law Center) attacking Miss Kitty Litter following her announcement on Camp Wannakiki. The hate group grabbed hold of her role in Drag Story Time, where she has volunteered for years reading kids books to children in an effort to teach kids about diversity and inclusivity. (We suspect the focus on Miss Kitty by this group of overgrown homophobes came about after InfoWars crashed her story hour at Austin’s Old Quarry branch library in June; the assault on Austin’s drag stars and storyhours was part of the alt-right’s sweeping push to put an end to Drag Story Hours across the country.)

Though Miss Kitty’s character was insulted – she even received death threats – she hasn’t backed down from storytime. In fact, she still finds time to not only participate in local Drag Story Times, but to also help others around the country establish and protect their own Drag Storytelling events. “It wasn’t my goal to be political with storytime or the reality show,” Miss Kitty sums up, “but sometimes it’s an accidental byproduct and you say ‘what can I do with this?’”

The haters also haven’t stopped Miss Kitty Litter from doing what she does best: making people laugh. She hosts a weekly YouTube series The Litter Boxxx, to showcase the eccentricity and talent (deh!) that can be found throughout Austin. In April, she’ll be performing with her reality TV sisters – including those from RuPaul’s Drag Race and Dragula – on The Drag Club House Spring 2020 Drag Cruise. She’ll even be making a small cameo in a top-secret movie this year (You heard it here first!)

Austin, and the world, haven’t seen the last of Miss Kitty Litter ATX cuz this queen won’t be hanging up the wig anytime soon. Stay on the lookout for what’s next with this campy diva. As Miss Kitty Litter says, “I’ve been around the block so many times I’ve burned a hole in the asphalt, but I’m still going like the Energizer Bunny.”