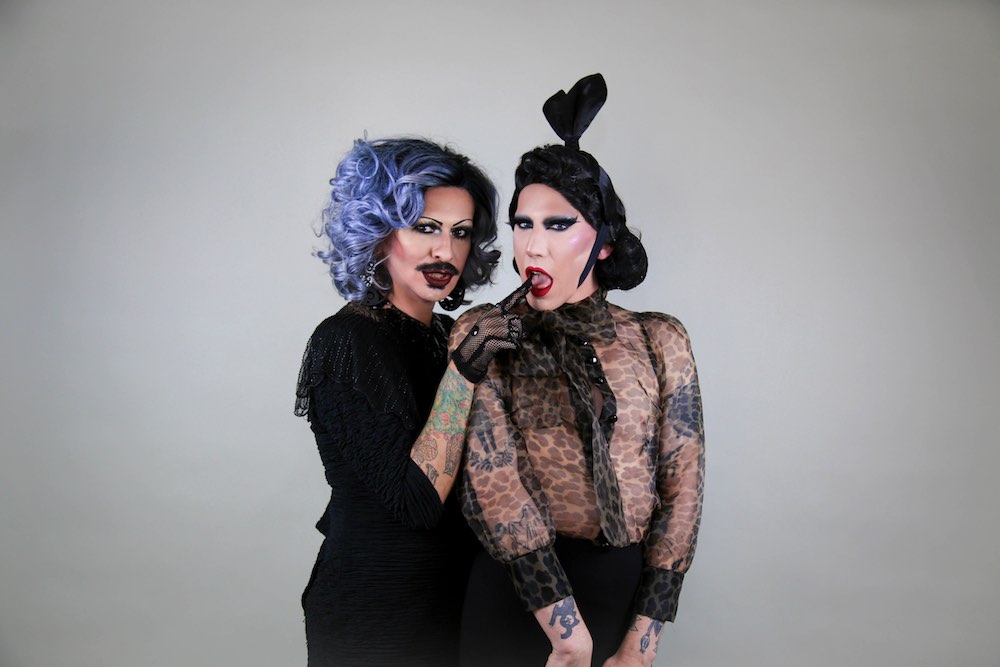 The new year is about to be here, but first let’s have one last hurrah for 2019.

By now, you’ve hopefully seen this week’s cover story, in which local and beloved scream queen Louisianna Purchase shared her origin story, her experience competing on Dragula, and what the future holds for the four-time “Best of Austin” award-winner. But with the new year – and decade! – in mind, we asked Ms. Purchase and her partner, Poo Poo Platter founder Bulimianne Rhapsody, to share their tips for having a New Year’s Eve fit for a queen (or two).

Stay In; Sit a Spell

When it comes to New Year’s Eve party plans, the couple agrees: For the love of all that is (un)holy, stay out of Downtown. “Make your own party,” advises Bulimianne. “[By] keeping it out of Downtown, you’ll have the right people there, not all the amateurs.” Louisianna agrees, noting she prefers “small get-togethers at home, more so than going out, you know, safety first.”

Dress Up … or Down

Just because you’ll be sittin’ pretty at home, doesn’t mean you shouldn’t gussy up. If anything, Louisianna advocates for “dressing fancy as hell” on New Year’s Eve. As she explains, “The fancier you dress – the more weirdly opulent you look – the better you feel and thus you bring that energy over into the new year.” For Louisianna, that means splurge-worthy perfume, sparkly crowns, and your “most non-sensible shoes,” like your fanciest heels. (We couldn’t agree more!) Adding to her sparkle, Louisianna tell us sparklers are a must for any NYE get together because she loves writing her name out with them and, really, who doesn’t love to see their name in lights?

On the flip side, Bulimianne’s guiding sartorial principle is dressing for an all-nighter, which might mean comfort over style. “Maybe that isn’t your tallest heels, maybe it’s some sensible wedges.” She giggles, “Louisianna would never be caught in wedges.” Unlike her boo, Bulimianne loves “all the ugly stuff,” which she likes to make even uglier. “We’re definitely very different in our drag. Louisianna’s very beautiful.” She adds, laughing, “I am okay to look at. I like getting a laugh out of my outfits for the most part.” Bulimianne offers, “We’re basically like a drag salt and pepper shaker set. I don’t know who would be the salt, necessarily. We can both be kinda salty sometimes. Probably a little dash of both in each shaker actually.” Basically, whether it’s up or down, it’s best to dress for the occasion – and to compliment your better half, if you’re so inclined.

A Li’l Champagne, But Always Lots of Water

Louisianna doesn’t drink, but she’ll do a New Year’s toast so you better bet there’s a little champagne. But if you imbibe in the bubbly, she warns: “Stay hydrated kids cause that will save you the next day.” And limit yourself while you’re at it, because in this queen’s opinion, there’s nothing worse than when a champagne headache comes a-knocking. ”It feels like your head literally wants to take a flight, and after a certain age, the bounce-back” isn’t so fast as we’d like it to be.

Let That Good Juju Trickle Into the New Year

After the clock has struck midnight and the sparklers have died, just remember to take those good times into 2020. “For me, treating yourself well and being sweet to yourself just carries over into the new year,” says Louisianna.

While New Year’s has never been a big deal for Bulimianne, her parting NYE tip is to “let go of things that are holding you back.” And don’t forget to set your goals, write them down, and make a plan. “Even if you don’t achieve them [in the coming year], they’re still there,” encourages Bulimianne. “They’re like an aspiration. If you don’t do it this year, maybe next year will be it.”