The soccer star wowed at the Texas Conference for Women 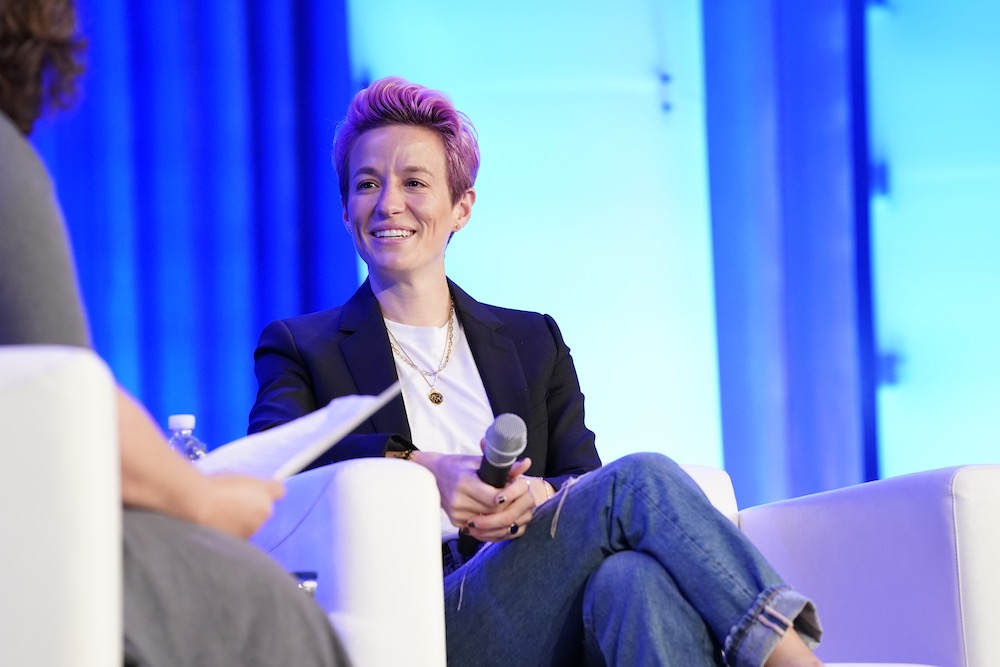 Megan Rapinoe, the pink-haired soccer star who led the U.S. Women’s National Team to its fourth World Cup victory this summer, credits growing up as an elite athlete alongside her 25-30 teammates for her confidence.

“It’s probably why I’m wild … and buck up against everyone else,” she said Thursday morning from the center of the Texas Conference for Women’s stage.

The USWNT co-captain was one of several keynote speakers at the conference’s 20th anniversary event held Oct. 24 at the Austin Convention Center. Focusing on the goal of women empowering women, TCW remains bipartisan, but Rapinoe spoke openly – as she’s become known for – about her politics. She and the rest of the USWNT have become fierce equal pay advocates in their ongoing legal battle with the U.S. Soccer Federation; in the fall of 2016 – a year after her first World Cup win – Rapinoe began kneeling for the national anthem in protest solidarity with then-NFL quarterback Colin Kaepernick regarding racial injustice. As an openly gay woman, Rapinoe is also outspoken about LGBTQ rights. And she’s made no effort to hide her disdain for our current president.

Onstage, when asked by interviewer Celeste Headlee, host of the Conference's Women Amplified podcast, if she had any interest in running for office, Rapinoe paused before saying: “This last election, I think, was an anomaly in that the person who was least qualified for the job got the job,” But this, she said, should not become the norm and quickly pointed to the many qualified candidates running noting, “eventually I’ll throw my weight behind one of the candidates, there’s just still so many." But that doesn't mean she's not staying involved, as a citizen of the U.S., she said she feels we "all have a duty and a responsibility to be involved. ... Everyone has a particular way they can be most impactful in their lives,” said Rapinoe, pointing to the “huge” platform given to athletes. “I feel like the best way I can do it is to always take the mic and talk about things that are important and keep the conversation going.”

Of course, in the current political climate, Rapinoe has come under fire by some for her advocacy. Headlee referred to a tweet she read earlier in the day implying that the USWNT should simply be grateful to play on a national stage, to which Rapinoe responded: “The idea that being paid equally, knowing what you deserve, and being grateful are mutually exclusive – that doesn't compute for me or anyone on the team.” She continued, noting the team is well aware of both its privilege and how seriously the members take their current roles as leaders in the game and for women’s rights. “I think we can be so proud and so grateful to represent our country and to me – pulling on that shirt doesn’t mean to be grateful for wearing the Stars and Stripes. To me that means fighting like hell every day that every person that lives under the Stars and Stripes is awarded the same opportunities as everyone else.”

So when Headlee asked the star – recently dubbed by The New Yorker as “everyone’s current favorite athlete, leader, and lesbian” – why she fights for issues that “do not affect you at all” such as racial disparities and criminal justice reform, she responded: “I actually would argue everything affects everything,” and, she continued, “as someone who’s in a minority group … if I’m going to ask people to be allies and respect that I’m gay and all of my rights – then I have to, in turn, believe other people, respect other people, and get behind them as well.”

Rapinoe, it seems, came by her beliefs – and her commitment to speaking up for others – naturally, telling the audience her mother raised her and her twin sister to be aware that being good athletes and popular didn’t make them cool. Instead, Rapinoe recalled, those roles came with responsibility. That belief system carried over into her soccer career, where her teammates have long encouraged and supported one another to be the best they can be. “We celebrate each other,” she explained. “And [we] give each other permission to be big and be bold.”

That mindset dates back to the USWNT stars of the Nineties: Mia Hamm, Julie Foudy, Michelle Akers, Kristine Lilly. Rapinoe said it “doesn’t stop at being the best soccer player that you can be – it’s so much more than that. You have a social responsibility.”

But it wasn’t all serious talk. Rapinoe lit up several times when asked about her girlfriend, WNBA star Sue Bird. Together, the two have earned a multitude of medals including five Olympic golds, alongside World Cups and WNBA Championships. As Headlee listed off the trophies, Rapinoe joked that her mom “got on the Google” to learn about Bird when the two began dating and quickly declared to Rapinoe: “‘Oh! You’re not very impressive anymore!'” She also confessed that a relationship between two professional athletes is “definitely a balancing act. Sue and I spend much more time away than together right now, but that’s just kind of the nature of it.”

The charismatic athlete closed with some advice to leaders: “Give women space to be themselves.” To the greater audience she said: “You don’t have to be exactly one thing or do it in a certain way, and all the qualities you have are exactly what you need” to succeed.