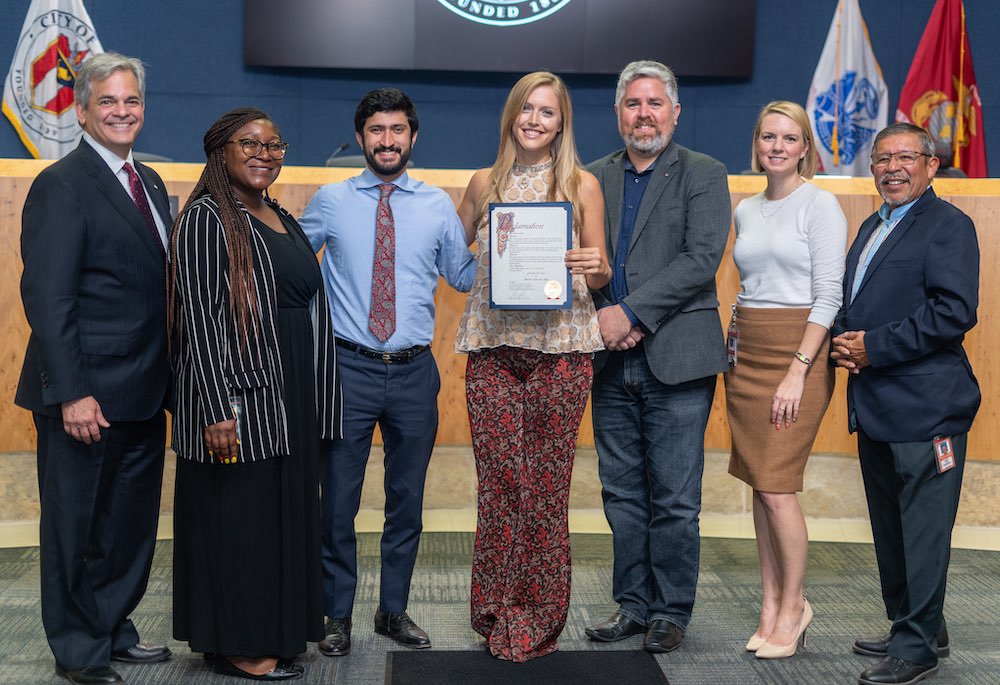 Yesterday, on October 17, 2019 – for the first time in Austin’s history – the City Council issued a proclamation that henceforth, Austin will recognize October 26 as Intersex Awareness Day with an event at City Hall.

This action connects Austin to an international movement fighting for intersex folks who are "often stigmatized and," as the city's press release notes, "subjected to multiple human rights violations, including their rights to health and physical integrity, to be free from torture and ill-treatment, and to equality and nondiscrimination."

My name is Alicia Roth Weigel. Today, I call Austin home, but I was named after a hurricane that hit Houston in the early Eighties. As the story goes, my parents were in a car crash while my mom was pregnant with me and were ecstatic that the pregnancy was not terminated. An amniocentesis test the doctors performed afterwards showed that I had XY chromosomes; walls were painted blue, gender specific gifts purchased, and everyone in the delivery room was shocked when I entered the world with a vagina. They hadn’t picked out any “girl” names, so in a game-time decision, my dad mentioned he’d always liked the name Alicia since they weathered that storm when they lived in Texas. Hurricane Alicia ultimately made it back to the Lone Star State, though now I’m here to help save lives – not destroy them.

I was born intersex, with internal testes instead of ovaries. Had the amniocentesis not been performed, my parents wouldn’t have found out I wasn’t your typical XX female, perhaps, until I didn’t get my period. But as they were aware since birth, actions were immediately taken to “normalize” me and raise me within the sex binary. As being intersex is pathologized in the states, doctors came up with justifications for a gonadectomy to remove my testes and surgically erase that aspect of my humanity. Unfortunately, they didn’t know it wasn’t that easy to take from me.

But they did take my physical autonomy – my ability to live without supplemental hormones, which not only carry health risks but are expensive in our existing health care system. They took from me my emotional stability, leading me to spend my formative years believing I was completely alone, with a “secret” that society and medical practice told me I was never supposed to tell. They took from me my fertility – my ability to produce children when they force-sterilized me.

Intersex kids often undergo numerous types of external changes too, which the UN Commission Against Torture defines as Intersex Genital Mutilation or IGM. In a 2010 article, The Nation shared details of one doctor at Cornell University, my own alma mater, who performs “clitoroplasties” on intersex children. According to the report, he uses a literal measure to determine the “normal size” of a clitoris and if it’s any bigger he cuts it down, which leaves many of these girls unable to feel pleasure or experience a healthy sex life due to scar tissue. But it also leaves psychological scars – especially when he uses a vibrator (as the Nation reports) to test how much sensation they’ve retained. Surgeries like these leave some kids trapped in a body that was surgically forced to align with a gender they didn’t choose, based on how some doctors have described it being "easier to dig a hole than build a pole.”

Regardless of which unconsented procedures we’ve been subjected to, from a physical development standpoint and an emotional standpoint, we’re not “fixed.” We carry the trauma with us, and being intersex remains a fundamental part of our identity.

From a socialization standpoint, I remember being split up by gender for middle school sex ed classes. I’d go with the girls and they’d talk about periods (which I’d never get) and about the experience of having a baby (which I’d never have). The shame and isolation I felt caused such an extreme state of anxiety that I had a panic attack and passed out in class. From then on, I carried around tampons I’d never need so I could lie about my existence more effectively. That isolation and shame followed me into every serious relationship when I’d have to explain why I wouldn’t be able to have his biological children, and hope that it wasn’t the nail in the coffin of our relationship. I’ve been forced to divulge this “shameful secret,” which he’d have to get past, rather than it simply being an aspect of who I am.

From a medical standpoint, my body’s always been counted in alignment with the “female” on my birth certificate, despite it being biologically in between. As such, there’s a vast dearth of research on intersex bodies and what we need to be healthy, leading to a lack of consensus on appropriate treatments and huge inequities in health care access. I can’t tell you the number of times I’ve been in stirrups at the gynecologist only to have other physicians called in so that I could educate folks (who’ve been to med school) on what it means to be intersex; it gets exhausting to have to tell someone with M.D. on their lab-coat, over and over, why there is no date of my last menstruation. And when our hormone-producing organs are ripped from us as kids, we often go without Hormone Replacement Therapy until an age where puberty is induced. Having essentially spent our childhood in menopause, without any hormones, many intersex people develop early-onset osteoperosis. All of us end up comparing what levels of which hormones have been prescribed, and how much all that has varied doctor by doctor – a word-of-mouth web of best-practices in the absence of truly competent intersex care.

From a political standpoint, we are systematically ignored and forgotten at best, and actively targeted at worst. The Trump administration’s plan to change federal civil rights laws to define sex “as either male or female, unchangeable, and determined by the genitals a person is born with,” was an intended attack on the transgender community, but it also would have written intersex folks out of existence. (In response, I got “I eXYst” tattooed on my middle finger so that I could respond to the president appropriately, should I ever meet him in person.)

When similar verbiage appeared in the 86th Texas Legislature’s religious freedom bills to legalize discrimination at the state level this past spring, I stayed at the Capitol for nearly 24 hours to remind legislators that this legal erasure of people like me in the eyes of the law would mean that laws would no longer apply to me – and that I fully intended to wreak havoc with no consequences, as such. Now, the highest court in the land is contemplating the meaning of discrimination based on sex (leaving intersex individuals out of the conversation completely) to determine whether or not members of the LGBTQIA+ community are worthy of workplace protections from discrimination. This begs us to consider our own local nondiscrimination ordinances and how we, as a city, can not just tattoo the fight onto our bodies, but truly take it into our own hands.

When the state and federal governments don’t reflect our values, Austin fights back. Whether it be our sanctuary city status for immigrants, or our commitment to providing paid sick leave for local workers, we make our own rules to protect and support the rights of our residents. As Mayor Steve Adler reminds us, we aren’t afraid to stand behind the most marginalized in our community. “LGBTQIA. Each letter is important,” he reminds us. “Each represents a group of very real people. Let’s acknowledge, support and celebrate them, and include our Intersex community where they’ve been left out before. We are proud of our intersex residents too.” On Saturday, Oct. 26, we’ll have the opportunity to lift up intersex voices for the first time at City Hall during Austin’s first official commemoration of Intersex Awareness Day.

Society creates the stigma and shame that cause us to suffer; those are not natural phenomena, like we – intersex people – are. Babies aren’t born knowing racism, sexism, hate. But some babies are born not 100% female or male. Help us raise awareness for the movement to uphold our rights. Austinites understand more than anyone that normalcy is overrated; as we work to keep our city weird, we should work to keep our intersex babies whole too.

Austin's Intersex Awareness Day event is Saturday, Oct. 26, at City Hall. The event is free; speakers will begin at noon.