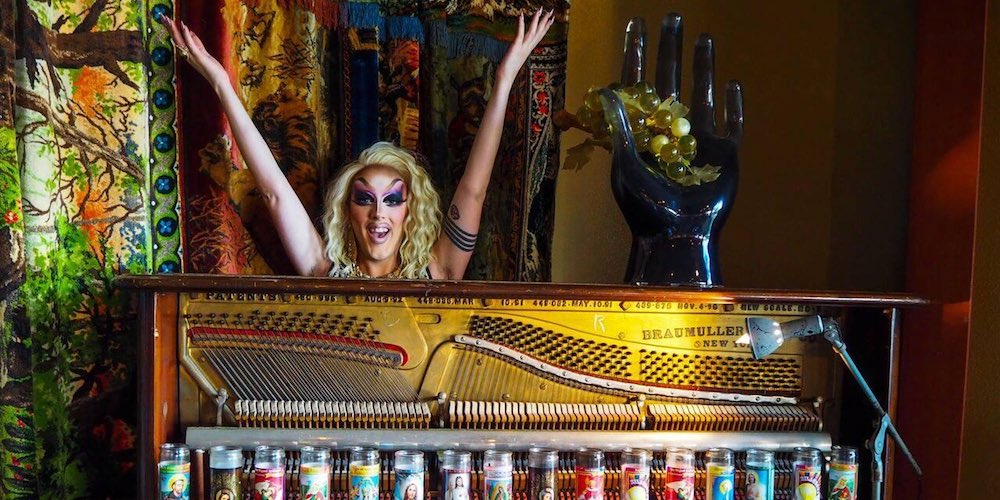 What does offensive, hot mess, and brunch queen all have in common? Okay, probably a lot of things, but that’s how Rhonda Jewels described herself when she sat down with Qmmunity to chat about the upcoming two year anniversary of her Irene’s Drag Brunch (and herself, of course!).

When Rhonda doesn’t have a painted mug and wig on, she goes by her birth name Jason and works as a server at Irene’s. The nails stay on for both personas, and aside from a little makeup, they aren’t that different. “Jason is loud,” Rhonda explained as she starts applying her Marilyn Manson lewk for the night. “Rhonda is just louder.”

As Rhonda – whose name is an ode to her mother “Jules,” and alternative hip-hop duo Run the Jewels – picks out her wig for the night, her roommate Zach Orr joined us in the bathroom to add that Rhonda brings something different to the stage every time. “She’s never afraid to take a chance and take a challenge to her own style. She’s also very punk and rules aren’t something that Rhonda will abide by.”

With nearly half a decade of drag under her tights, Rhonda reflects on the first drag brunch at Irene’s in August 2017. It was pretty big for the kickoff – even Hurricane Harvey stopped by, pushing the brunch into the less spacious interior of Irene’s. “The bar was four rows of people deep, all the tables were full,” Rhonda recalls. “It was me, Mandy Quinn, and Y2K. It was a blast, so we decided to do it once a month.”

Since that rainy meal, Irene’s Drag Brunch has grown into an always-packed, two-hour event. According to Rhonda’s drag mom Mandy Quinn they spent the first few months figuring out the logistics – from music to inside versus outside. But as it grew, Rhonda began inviting other local drag performers to cohost with her. Eventually, it became a place for Rhonda to spotlight up-and-coming queens and help them get their performing feet wet. 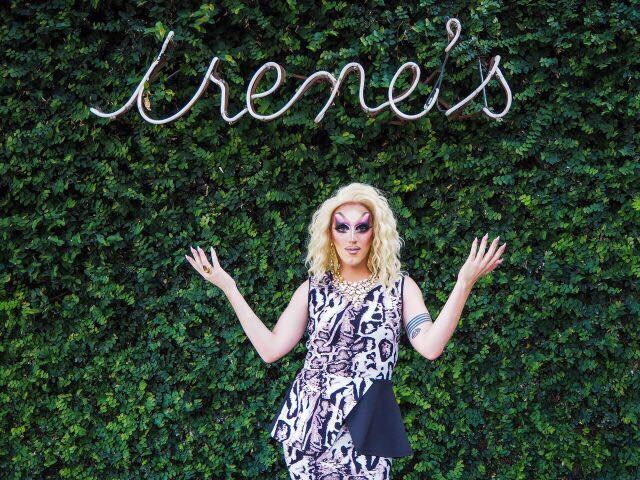 Getcher brunch on with Rhonda at Irene's (Photo provided by Irene's)

As Irene’s first monthly event, they were unsure of what would be successful, Irene’s General Manager Brenda Carielo reminisced. After it turned out to be a major hit, with Rhonda’s flawless planning and coordinating, VIP tables were offered and now sell out two months in advance. “We’re humbled by the roaring support we have from our community, fans, and neighbors,” Carielo adds.

Nowadays, it’s not the same Saturday brunch you can just stumble into. The addition of VIP tables and sponsorship from Babe Rose attracts quite the crowd on Irene’s back patio – from bachelorette parties to local Austinites. A portion of the VIP proceeds go to a local nonprofit of Rhonda’s cohost’s choosing (previous organizations include Out Youth, Kind Clinic, Planned Parenthood, and Austin Pets Alive!). In fact, along with the staff, this is one of the reasons Irene’s considers the brunch to be so successful.

“We’re not only putting on a show, but we are giving back to the community,” Carielo says. “ We want to make an impact by being ever so conscious and welcoming of our community around us, while having and providing a good time for our guests.” It’s hard not to have a good time – and hard not to get buzzed doing it. The drag is interactive, the dialogue is raunchy, and the energy is through the roof.

On Saturday, Aug. 31, Rhonda is bringing it all back to where it started with Mandy Quinn. Rumor has it there will be cake (fingers crossed!) and maybe Mandy will grace us with how she found Rhonda and wrangled a drag baby. Spoiler alert: It involves SpaghettiOs. The rest you’ll have to find out at brunch. Happy Birthday to you, Irene’s Drag Brunch, from your friends and brunchers at Qmmunity.

Snag your VIP table for October (September is already sold out) online starting September 1. Walk-ins for general seating are welcome but are based on a first-come, first-served basis.

Can’t get enough of Rhonda or Mandy? Find their September schedules below.