Contrast Review: The Whisper of the Jaguar

It starts with the sounds of a river. Macaws call and leaves ripple along the water. This is the beginning of The Whisper of the Jaguar, a feature from Brazil screened as the first in Contrast Film Festival’s matinee series “Brazil in Focus.” 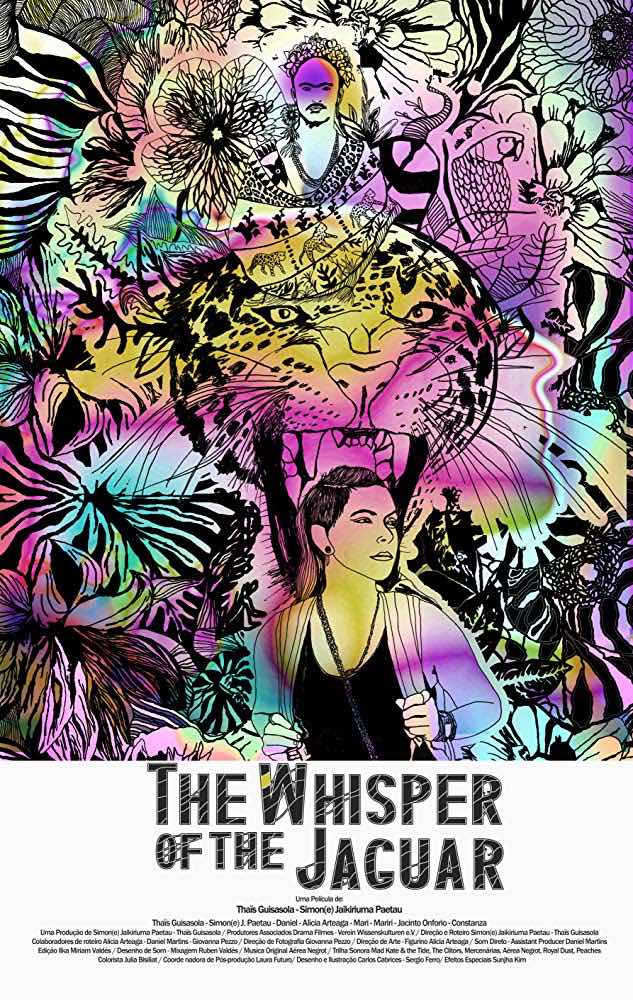 Written and directed by Simon(e) Jaikiriuma Paetau and Thais Guisasola, the film follows main character Ana (Guisasola) on an unplanned spiritual journey through the Amazon. On the heels of her genderfluid sibling’s death – the character’s pronouns switch from he to she throughout in the dialogue – Ana carries their ashes through the region, and in the process rediscovers a history she had lost.

Perhaps the most striking image in the film is Ana’s sibling Sebastian (Paetau) penetrating themself with a cob of corn, in protest of GMO-usage and agriculture stripping away the land. Long takes of Sebastian create a soothing rhythm to the film: Sebastian gracefully dances along a hundred-foot tree trunk, daring vultures to approach while posing for the camera, dressing in ornate, native clothing and holding a parrot – a blooming vision of every color. As Ana retraces her sibling’s path, she submits herself to nature, pleasure, herbal medicine, and ancestral knowledge. Her memories and videos of Sebastian act as enlightening dream sequences, reappearing as she remembers her indigenous ancestors.

While the cinematography and lyrical narration are both stunning, it’s the film’s sound that causes the largest impact. The Whisper of the Jaguar is about just that – whispers, those of the river, of the cornfields in the breeze, of the endangered animals in the rainforest. In the one scene with a jaguar itself, audio of its roar plays over video of it sitting silently, docile and caged. Time and time again, Ana still hears nature embedded in the rhythm of life itself, human constraints be damned.

The second annual Contrast Film Festival runs Thursday-Sunday, July 18-21, at multiple venues around town. Badges are sold out, but individual tickets are still be available for some showings – see online.

Summer of Pride, Contrast Film Festival, The Whisper of the Jaguar