Spectacle is one powerful piece of coinage, used when one knows the scene unfolding is on a level above the everyday. Performance without spectacle is the realm of soggier folk, those who watched the original Hairspray and thought, “Hm. Too spicy for me,” and to that realm, one mustn’t wander. 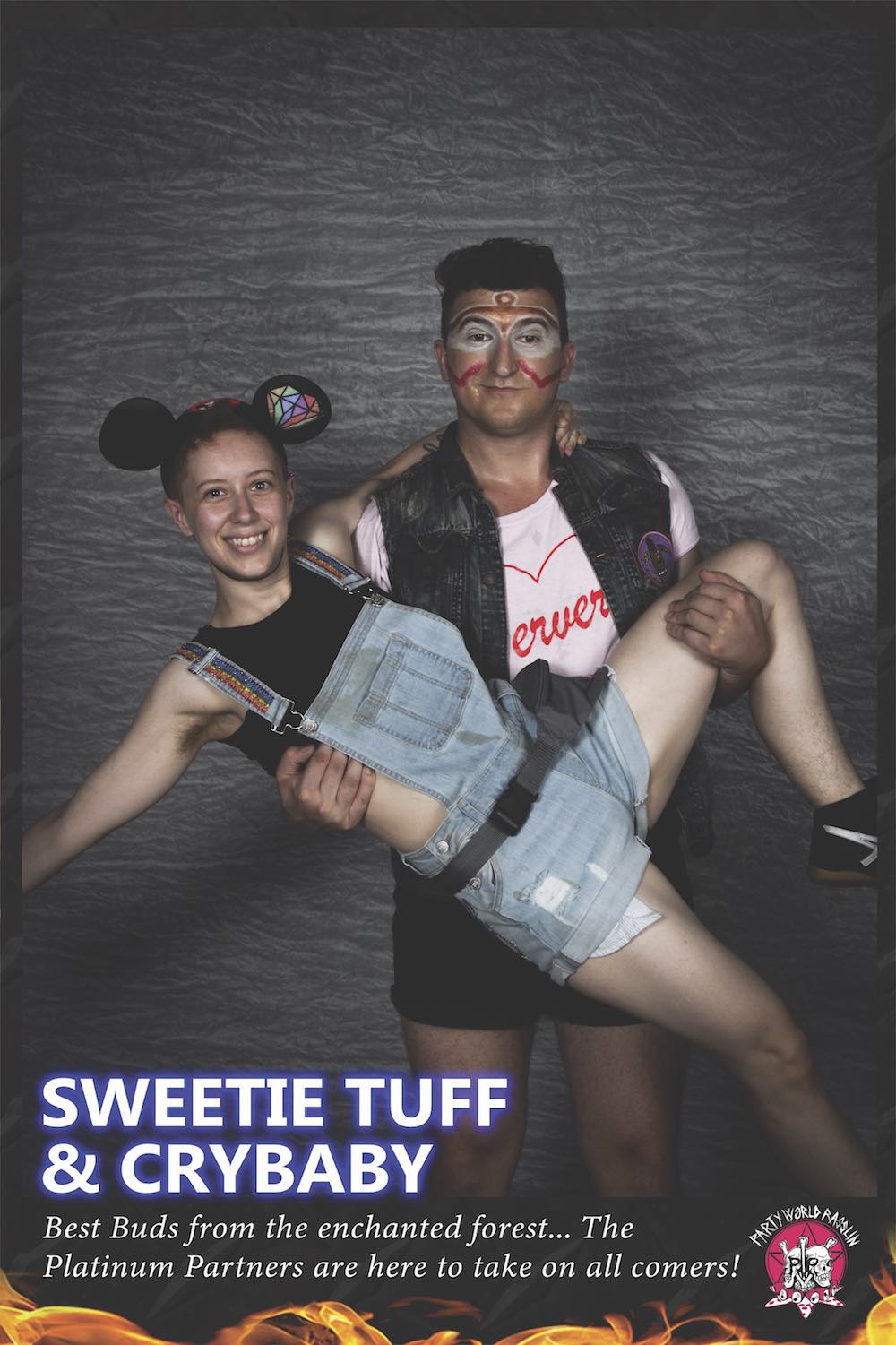 Not when just beyond this mortal coil – but right within the dwellings of the omnipotent Mother Worm – is a world brightened considerably by the spectacle of the new power-packed Party World Rasslin’ tag team contenders: The Platinum Partners. PWR’s first queer duo is made up of Crybaby and Sweetie Tuff, two wrestlers whose dreams exceed giving their opponents the Dumpster Babes a pummeling.

A self-described “Grand Ritual,” PWR is Austin’s own local wrestling show and the June 15 ticket – the blood-pounding Bioslam, where Platinum Partners plan to make their debut – will certainly be an event that riddles the skin with hives of exhilaration. Wrestling has always been the land of the wild, the bold, and only the crispest of crisp survive such sparkling times and these two queer wrestlers have been incredible solo forces in previous forays around the PWR Multiverse. But their coming together was joyous for both as well as, according to Crybaby, shrouded in an air of appropriate mystique. “Crybaby and Sweetie Tuff were drawn together by the ineffable pull of magic and destiny,” they demure. “You might say we had no choice but to team up and kick ass.”

Sweetie Tuff’s own recollection contains more detail, but still emphasizes their mutual magical destiny. Following the Brawl of the Wild event where “PWR came and did a show in my forest home,” Sweetie Tuff, a decorated but lonely forest nymph, exclaims they were “floored by the support of the Multiverse” and immediately “got on an interdimensional bus to this timeline.” Around that same time was when they first met Crybaby. “I convinced them to see their magical potential,” Sweetie Tuff recalls. “We’ve been the bestest friends ever since!”

Bestest friends uniting to create the ultimate fighting duo, the Platinum Partners wear their queerness with pride and use it to inform their wrestling identities. For both wrestlers, the spectacle of brawling, glitter, and glory goes hand-in-hand with the pageantry of queerness. Of their personal experience, Sweetie Tuff recounts watching the Attitude Era of WWE (World Wrestling Entertainment) and finding the representation therein less than ideal. “Which was always wild to me,” they explain, “because wrestling is inherently queer!”

Crybaby cites a similar lack of good, ass-kicking representation for the qmunnity as what solidified their wrestling persona. “My queer identity is absolutely the dominant influence on my narrative,” they state, adding that they “see so few LGBTQ role models anywhere, much less in wrestling.” The absence rung so loudly in their ears that they say, “When I had the opportunity to join PWR as a performer, I knew it needed to be with an explicitly and proudly queer character.” Partner Sweetie Tuff had a similar resolve and says their persona is meant “to be an inspiration to the queer youth to be kind and do violence.” Is there anything more important for the children of today to learn? No; there isn’t.

With a big match on the way and a whole lot of thrills coming from PWR’s first all-queer tag team, these Platinum Partners are ready to take on the competition. Crybaby concludes that a win for the two would be “huge” and adds, “I think it would show the Multiverse that the Platinum Partners are much more than just two magical friends goofing off.”

“The Platinum Partners are here to usher in a new era of magical friendship and exciting athleticism,” proclaims Sweetie Tuff, “and to show our love for our fans and each other through the joys and splendor of professional wrestling!”

Join in the splendor with the Platinum Partners at PWR: Bioslam on Saturday, June 15, 6:30pm, at 4th Tap Brewing Co-op. Want to know more about the mystical and enchanting exploits of these two wrestlers? Follow Crybaby’s Instagram (@CrybabyWrestler) and Sweetie Tuff, who is on Facebook via magical forest Wi-Fi.