Queer Collaboration Yields Otherworldly Campiness in p1nky and The Kwane: Another Soup Opera! An offhanded joke from a night at Cheer Up Charlie’s provided the spark.

Add a sizable queer community, a helpful portion of accessible funding, and an impressive DIY grit and you’ve got the winning recipe for p1nky and The Kwane: Another Soup Opera!, a campy queer musical opening its weekend-long debut run Friday, May 31, at the Museum of Human Achievement (MoHA).

The surreal show is a collaboration between multi-hyphenate artists Wayne Bruce Dean, Josue Allen Hart (best known as a founding member of the Texas-grown performance collective House of Kenzo), p1nkstar, and Y2K – an often-duo who’ve come to dominate Austin’s queer art and nightlife scenes. The musical tells the story of Dr. Fou (Dean) and his assistant/bodyguard/nurse (Hart), whose lust for world domination hinges on the creation of the perfect weapon – two genetically modified human-mice hybrids, p1nky (p1nkstar) and The Kwane (Y2K).

If the show’s title and plot elements seem vaguely familiar to those of a certain age, that’s because it is a riff on the Nickelodeon animated series Pinky and the Brain that originally ran in the mid-nineties. A year ago, Dean noted the similarity between the show’s title and p1nkstar and Y2K’s names one night while out at Cheer Ups. “I was like, ‘Wouldn’t that be really funny if we did a small performance with p1nkstar and Y2K as mice?’” Dean says. “They laughed and thought it sounded really cute and dumb.”

The inside joke ruminated until this spring when the foursome began to think more seriously about bringing the production to reality. Originally conceived on a shoestring budget as a fundraiser to be put on in the living room of the house Hart, p1nkstar, and Y2K share, the project’s scope quickly expanded, and its themes departed from the original source material.

Dean describes the show’s aesthetic as bootleg, tongue-in-cheek, and referential of surreal, live action-anime hybrids like Food Party, The Muppets, and Sesame Street. “It’s like if you were flipping through channels and there’s nothing on but a bunch of cartoons,” he says. One of Dean’s primary artistic mediums is illustration, and p1nky and The Kwane considers what the world might look like if these illustrations came to life. Though their experience working in Austin’s more formal theatre spaces is somewhat limited, the collaborators capitalized on the unique mix of skill sets among them and an insurgent DIY practice to execute and make space for their vision. Last summer Dean, who co-founded the now-shuttered ATM Gallery, directed his first production Dreaming Together: Not a Wink. Collaborators on the project included Hart – who designed costumes for both Dreaming Together and p1nky and The Kwane – p1nkstar, and Y2K, among others, and proved to all involved just how exciting queer collaboration can be.

“The result was really amazing, but very different,” explains p1nkstar. “With Dreaming Together, each collaborator had their own segment, but I never really knew what was going to happen except for my part. It was exciting because of that.”

For p1nky and The Kwane, the core collaborators originally approached Co-Lab Projects in search of a space. While the organization didn’t have a location for them, they encouraged the group to apply for a grant from the Cultural Arts Division of the city’s Economic Development Department to help finance their vision. “Basically after we met with Co-Lab we had three days to write the entire script, budget, and plan everything, and write the proposal,” says p1nkstar. The group secured MoHA as its venue, and their quick grant-writing turnaround paid off – they were awarded the full amount they’d requested to cover the venue and production costs. Admission donations will pay the performers.

If the scale of the sets and props they’ve constructed, plan for interactive elements, and delightfully weird musical numbers are any indication – the performance promises to immerse audiences in a campy, queer reality where tipping is encouraged and kids are welcome. Creating these worlds to celebrate queerness is important because, as Hart notes, “Reality is boring.”

If you can’t catch the musical, you can find the collaborators in action elsewhere. Dean, Hart, p1nkstar, and Y2K are among the creators of the queer dance party Cut Up!, which is held every Tuesday at Elysium. They will also be showing work in the group exhibition “All Shades Considered” – featuring Texas-based QPOC artists – curated by Ben Aqua (who, in true collaborative fashion, helped produce music for tp1nky and The Kwane), and opens with a reception Friday, June 7. p1nky and The Kwane: Another Soup Opera! has performances Friday, May 31, 9pm, and Saturday, June 1, at 9pm, and Sunday, June 2, at 7pm and 9pm, at the Museum of Human Achievement (3600 Lyons Road.). $10-25 suggested donation for general admission, $35 for VIP, but nobody will be turned away for lack of funds. Tickets are available online. Cash bar. 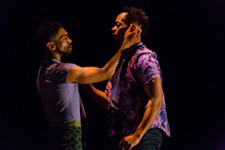 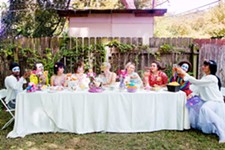